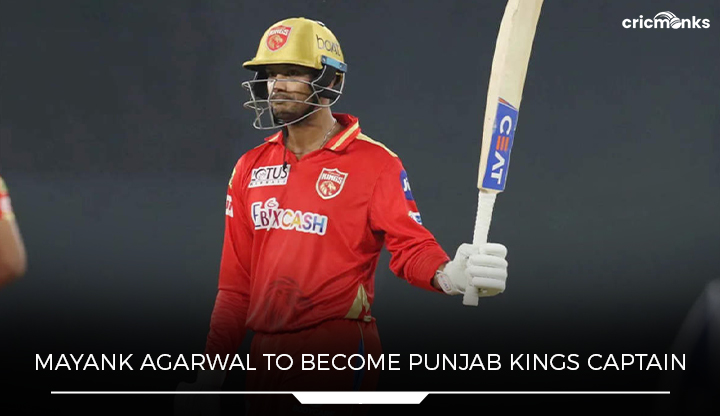 Mayank Agarwal has been appointed as the captain of the Punjab Kings in the Indian Premier League. The Punjab franchise made an official announcement on February 28. Among the two preserved ones Punjab Kings were to retain before the immense auction, Mayank Agarwal slides into the earlier captain, KL Rahul’s shoes. He was a part of the leadership group of the side and was one of the only two players retained by the franchise before the mega auction. He was one of the two retained players, along with young pacer Arshdeep Singh.

Punjab Kings had the most amount of money before the auction and they made the best use of it by going after some of the fearsome strikers of the cricket ball. The pool of players bought by Punjab Kings at the mega auction includes Shikhar Dhawan, Jonny Bairstow, Liam Livingstone, Kagiso Rabada, Odean Amith, Shahrukh Khan, and Rahul Chahar. This is the strongest pool of players that have represented Punjab over the years. Punjab is a side that never settled with a particular captain and they are acclaimed for changing the squad and support staff frequently. They tried to give KL Rahul a long run as their captain, but the opener himself opted out for a fresh start.

Mayank Agarwal has been a mainstay of the tournament since 2011 and has represented the Delhi and Pune franchises before finally moving to the Punjab franchise. He became a part of the Punjab side in 2018 and he has managed to score 2135 runs at a 23.46 average at a strike rate of 135. He was a highly underrated opening batter in the shortest format and his use of feet against spin bowling made him dangerous during the middle overs. He, along with KL Rahul, scored the bulk of runs for Punjab right at the top. He is someone who has known the franchise closely and has shared a great camaraderie with all the members of the group.

I take over this responsibility with utmost sincerity: Mayank Agarwal

Mayank Agarwal admitted that he was “delighted” and will take the opportunity with “utmost sincerity” after being appointed as the new skipper of the Punjab side.

“I’ve been with the Punjab Kings since 2018, and I’m really proud to be a part of this amazing team.” I am overjoyed to have been granted the responsibility to encourage the team. I accept this responsibility wholeheartedly, but I also feel that the quality on the Punjab Kings roster this season will make my work simpler.” Agarwal said.

“We have some very experienced players on our team, as well as many talented young players who are eager to seize the opportunity and run with it.” We have always come to the field expecting to win the title, and as a team, we will strive hard to achieve our first IPL trophy. I’d want to thank the coaching team for giving me all of this new position of side leader. “I’m looking forward to the upcoming campaign and the new responsibilities it will bring,” he added.

Mayank Agarwal was retained for a sum of INR 12 Crores by the PBKS franchise before the auction. KL Rahul who was the captain of the side was the obvious choice, but he decided to enter the auction without being retained. He was eventually picked by the Lucknow franchise before the auction, leaving the Punjab kings in search of a new captain. They went into the auction by retaining only Mayank Agarwal and Arshdeep Singh. Though initially, the Punjab franchise had no initial plans of making his as their leader, their search for a new person had ended up on the obvious choice of Mayank who has been the heart and vein of the franchise.

In the 2021 season of the IPL, the 31-year-old had been in prime form. Agarwal scored 441 runs in 12 innings last year, with an amazing average of 40.09 and a strike rate of above 140. Agarwal has had four half-centuries for the Punjab Kings side in the 14th edition of the IPL. His contributions at the top had always been underrated and he scored runs at a brisk rate also which makes him a rare asset for the side.