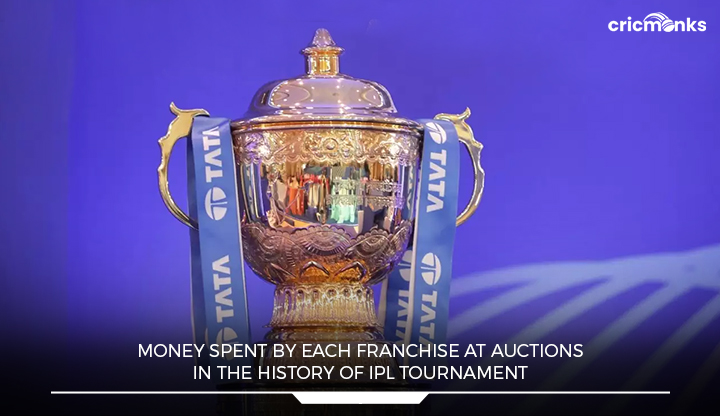 The Indian Premier League has provided a platform for T20 talents from across the globe to get together and compete to be the top of the greatest. It has additionally provided a venue for brilliant teenagers to demonstrate their abilities on the large arena. Ever since beginning in 2008, the Indian T20 spectacular has impacted the careers of numerous athletes across the world and undeniably redefined T20 cricket. The IPL auctions have remained an important component of the premier event since it allows teams to rebuild their rosters and evolve into a stronger replica of itself. Each team is subject to a minimum wage in order to maintain a fair playing environment in the IPL marketplace. Here we present the examined total expenditure of all 10 Indian Premier League teams.

Gujarat Titans produced a big impression in the IPL by drafting Hardik Pandya, Rashid Khan, and Shubhman Gill for the 2022 edition. They offered a hefty INR 15 crore apiece to Hardik and Rashid. GT emerged to the event having INR 52 crore in their pocket. The Gujarat organization spent a lot of money to bring in Kiwi quick Lockie Ferguson and all-rounder Rahul Tewatia. GT paid INR 10 crore for Ferguson and INR 9 crore for Tewatia. They were also big fans of Yash Dayal, who bid for 3.20 crore during the auction. Hardik and company spent INR 6.25 crore to get Indian veteran Mohammed Shami. Gujarat made some excellent choices, and their acquisition of David Miller for INR 3 crore was one of the bargains of the big auction. Hardik & Co. invested INR 88.3 crore to assemble a group of 23 players with a good mix of talent and maturity. GT continued to make history by claiming the IPL championship in their first season.

Lucknow SuperGiants showed in the 2022 season that they are not afraid to spend big money on talents that catch their attention. They invested a whopping INR 17 crore to secure KL Rahul as their first-round draft choice. Furthermore, LSG paid INR 9.2 crore for Marcus Stonis’ efforts. The Lucknow franchise placed a high value on attracting fast pacers and multifaceted performers during the 2022 mega auction. They went guns and knives to acquire Avesh Khan, paying INR 10 crore for him. LSG also made significant purchases during the tournament, including Jason Holder (INR 8.75 crore), Krunal Pandya (8.25 crore), and Mark Wood (7.50 crore). Lucknow assembled a well-rounded group of 21 players, and the new club paid INR 89.2 crore to do it. LSG enjoyed the benefits of a successful auction by making the playoffs in their debut season.

Rajasthan Royals beat all doubts and accomplished destiny by clinching the first Indian Premier League in 2008. Unfortunately, the Rajasthan franchise has never been able to recapture the enchantment. The nearest they came to winning a trophy was in the 2022 season, when they finished second in the competition. The Rajasthan team is not known for lavish spending at bidding. This is clear from the fact that RR has spent a maximum of INR 613.3 crore in the prestigious T20 tournament’s 15 seasons, which represents the lowest across the teams participating since 2008. Nevertheless, there have been occasions when they have deviated from this tendency and pushed all out to recruit specific players. RR pursued Ben Stokes and Jaydev Unadkat at the 2018 IPL bidding process and won both players for INR 12.5 crore and INR 11.5 crore, respectively. Rajasthan also made headlines when they paid INR 16.25 crore to Chris Morris in the 2021 player auctions, establishing him the most costly acquisition in IPL history.

Sunrisers Hyderabad, led by David Warner, etched their footprints in destiny by claiming the IPL championship in 2016. In the seasons that followed, they were relatively steady, making the playoffs four times in a row but never making it all the way. Hyderabad’s success has deteriorated recently, with the team finishing eighth in the previous two years. SRH has traditionally kept a quiet profile at the beading table, which is why they are sixth on the list of companies who have spent the most. Nevertheless, at the 2018 player sale, Hyderabad went all out to get the skills of Manish Pandey and Rashid Khan, signing them for INR 11 crore. Nicholas Pooran was finally acquired by Hyderabad for INR 10.75 crore after Hyderabad went all-out to draft him into the squad at the 2022 super auction. SRH also paid INR 14 crore to keep Kane Williamson for the 13th version of the event.

Chennai Super Kings have consistently been the most cohesive team in the Indian Premier League ever. CSK has won the event four times and finished second five times in the franchise’s 13 appearances. The Chennai team’s most recent victory was in 2021. The four-time IPL winners have spent INR 761.1 crore to hire top-quality professionals of their choice for the prestigious T20 event. At the first auction in 2008, Chennai paid INR 9.5 crore for MS Dhoni’s skills, which turned out to be one of the franchise’s most historic purchases, as it was under Dhoni’s guidance that CSK went on to be among the most powerful teams in the league. CSK recognised the importance of a versatile player of Ravindra Jadeja’s quality prior to the 2012 campaign and invested a hefty INR 12.8 crore to get him. Jadeja has been crucial to the squad ‘s triumph, and the four-time IPL winners have secured the lefty for INR 16 crore before the 15th season. The Chennai side is notorious for its player commitment, which was on display when they fought gun and dogs to re-sign Deepak Chahar at the 2022 mega auction and ultimately snatched him for an absurd figure of INR 14 crore.

The Punjab Kings which was previously titled as Kings XI Punjab has struggled in the prestigious T20 competition. They advanced to the knockout stage in their first season and then to the finals in 2014. However, except from these two occasions, the Punjab club has been denied a playoff place on several occasions. In order to restore the squad, PBKS has made sweeping changes at times and spent large sums of money at auctions. The Punjab club paid INR 11 crore for the services of flamboyant batter KL Rahul ahead of the 2018 campaign. They moved all out to recruit Glenn Maxwell for the 14th version of the event, paying INR 10.75 crore. The Punjab team paid a whopping INR 14 crore for Jhye Richardson in the 2021 IPL sale. They also went all out in the 2022 big auction to get Liam Livingstone, eventually winning him for INR 11.50 crore. PBKS’s overall investment throughout the years would amount to INR 778.3 crore.

The Delhi Capitals were known by the name of Delhi Daredevils until 2018 and have been dogged by instability throughout the seasons and have yet to win a trophy. Nevertheless, they have produced some remarkable cricket in the previous four seasons, qualifying for the playoffs three times. In the 2020 season, they almost made the finals but were defeated by the Mumbai Indians in the final. DC has contributed a maximum of INR 826.6 crore on 15 editions of the lucrative T20 league. They have busted the bank a few times to acquire a player. The Delhi team paid INR 12.5 crore for Dinesh Karthik at the 2014 player bidding. The Capitals then pursued Yuvraj Singh in the subsequent auction and ultimately acquired him for 16 crore. DC spent INR 9 crore in order to include Glenn Maxwell to their armory for the 2018 edition of the cash-rich league. Another large acquisition from Delhi occurred in the last IPL sale, when they bought Shardul Thakur for a whopping INR 10.75 crore.

The Kolkata Knight Riders have clinched the IPL twice, in 2012 and 2014. In the 14th season, the Kolkata club advanced to the finals but was defeated by the Chennai Super Kings. Kolkata have made numerous star acquisitions and have had to pay a lot of money to get players they want. KKR went all-in to recruit Gautam Gambhir in the 2011 player auctions, eventually paying INR 14.9 crore for him. This turned out to be a great investment because Gambhir led the Knight Riders to two titles. KKR went all-in for Pat Cummins in the 2020 IPL auctions, paying a hefty INR 15.5 crore. The Kolkata team left no stone uncovered in the last auctions to get Shreyas Iyer for INR 12.25 crore. In aggregate, the two-time IPL winners have spent over INR 852.5 crore during the 15-year history of the high-profile league.

The Mumbai Indians are the IPL’s most accomplished team. They have claimed the T20 spectacular five times under Rohit Sharma’s captaincy, the most recent victory being in 2020. They have also finished as runners-up once. Nevertheless, in the most recent event, they were a faint shade of their former selves and were the contest’s wooden spoon bearers. Once it relates to signing players, MI is well behind the competition. They used piston and guns to get Ishan Kishan in the 2022 super auction, paying INR 15.25 crore for him. The Mumbai team also spent INR 8.25 crore to sign power-hitter Tim David. Other notable auction purchases by MI include Jofra Archer (INR 8 crore in 2022), Krunal Pandya (INR 8.8 crore in 2018), Nathan Counter-Nile (INR 8 crore in 2020), and Maxwell (INR 6.3 crore in 2013). The five-time IPL winners have invested a combined INR 884.5 crore on excellent employees throughout the seasons.

The Royal Challengers Bangalore has been one of the cash-rich league’s top iconic teams. RCB have shown flashes of greatness in the flagship competition, but they have yet to carve their titles in posterity. Bangalore’s finest years have been 2009, 2011, and 2016, when the teams finished as runners-up. The Royal Challengers Bangalore are the game’s biggest purchasers, having spent a whopping INR 910.5 crore since its establishment. They have frequently stolen the show with their high-profile signings. The Bangalore franchise spent an absurd sum of INR 14 crore to sign Yuvraj Singh at the 2014 IPL bidding. Tymal Mills was bought by RCB for an eye-watering INR 12 crore before the 2017 season. Also, in the 2021 player auctions, the Bangalore club went to great lengths to secure Kyle Jamesion and Glenn Maxwell, acquiring the duo for a total of INR 29.25 crore.