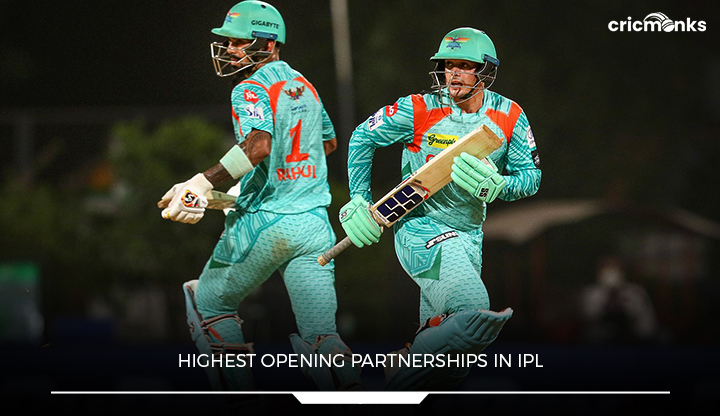 Opening partnerships are highly crucial in a T20 match especially in a high intense competition like Indian Premier League. Each and every side will be trying to get off to a solid start with the bat in the first few overs of the game. The approach of the side with the remaining batters in the match will be determined by the approach of the opening batters. It is important for the opening batters to put the opposition under pressure by taking the game on during the initial overs of the match. It is often seen how early wickets can cause huge problems for the batting side. So, it is important for the opening batters to score quick runs without losing any runs.

On some occasions, the opening batters were able to take the game deep and bat through almost the whole innings. Here we are sharing some of the most important knocks by opening batters in the Indian Premier League.

Quinton de Kock and KL Rahul currently hold the record for the highest opening partnership in IPL history. In the 2022 IPL season, the Lucknow SuperGiants duo scored 210 runs against the Kolkata Knight Riders in Mumbai. It was a dream batting performance from De Kock who outscored his partner by scoring 140 off only 70 balls. Rahul scored 68 off 51 balls while performing a supportive role. Interestingly, both batsmen batted off as KKR failed to secure a single wicket in 20 overs.

Jonny Bairstow and David Warner were a dream combination for SRH. The Aussie and British were taking apart every bowler who came against them. This partnership happened against Royal Challengers Bangalore when both of them smashed centuries in the same game during the 2019 IPL season. Bairstow made 114 runs on 56 balls, whereas Warner scored 100 on 55 balls. They both scored 185 runs for the first wicket, and SRH finished with 231/2 in 20 overs. RCB crumbled to 113 runs in pursuit of the score, losing the game by 118 runs. Bairstow was named player of the game for his magnificent century.

Gautam Gambir and Chris Lynn formed a destructive opening pair for KKR during IPL 2017. The Gujarat Lions scored 183/4 in 20 overs with the help of their skipper  Suresh Raina who scored 68 runs off 51 balls for them. The Aussie opener along with captain Gautam Gambhir went all out against the Gujarat Lions. KKR openers made sure that no other batter was necessary to chase down the target as they won the match by 10 wickets. The partnership included 184 runs in which 76 ws scored by Gautam Gambhir and Lynn hitting 93 runs to his name.

Fans will remember this game for Rahul Tewatia’s blistering knock, which propelled Rajasthan Royals to a dramatic victory. But, very few people know about the important knock played by the Punjab openers that lasted for a century partnership. Mayank and KL Rahul partnered for 183 runs for the first wicket against the Rajasthan Royals, helping the side to a total of 223/2 in 20 overs. Mayank Agarwal made the bulk of runs scoring 106 runs off 50 balls in the first innings. KL Rahul supported him with 69 runs off 54 balls which included seven fours and one six.

The best opening partnership by the latest pair of CSK openers came in the game against SRH when they were put into bat first by SRH skipper Kane Williamson after winning the toss. The openers went all guns blazing against one of the better bowling sides of the whole competition. Ruturaj Gaikwad and Devon Conway took it steadily before really blasting their superb ball striking on the opposing bowlers. Ruturaj was unfortunate not to get a hundred, scoring 99 off 57 balls, while Conway batted the entire game, staying undefeated on 85 off 55 balls. Both openers contributed 182 runs for the first wicket, thereby setting a new record for the men in yellow.