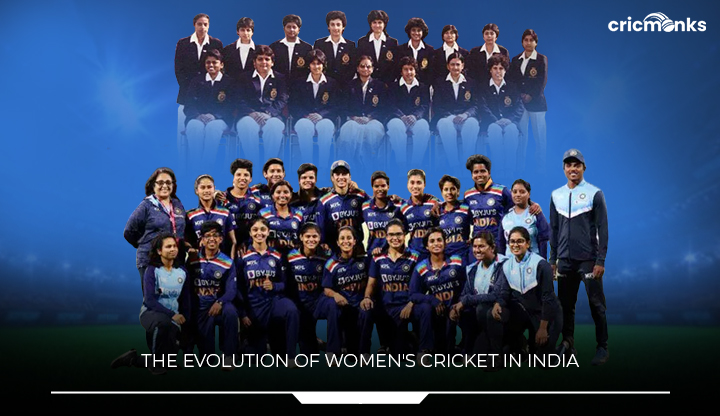 Cricket is often termed as a gentleman’s game by virtue of it being one of the most prevalent sports in the country. Even though cricket is a highly popular sport among men in India, and is primarily contested by males, there are some women who yanked their boots and had outstanding achievements throughout the years representing the country. In a male dominant society, making a mark for themselves in any field is as majestic as it could ever be. In a nation where cricket is considered a religion and men worshiped as Gods, there lived some female athletes who loved the game as much as anyone. By unwinding the roots of the humble beginnings of women in India, we here examine the history behind the success for women in the game of cricket who dared to dream in achieving the feat of playing for the country.

The actual birth of women’s cricket

The inaugural women’s Test match involving two nations was played between England women and Australia women in December 1934. The group was later joined by the Blackcaps women which lasted till the Netherlands women becoming the 10th nation to officially roll out as an international women’s cricket team. The Netherlands women played their debut test match against the South Africa Women.

The first edition of the Women’s Cricket World Cup was held in 1973 that resulted in the Women’s One Day Internationals (ODIs) format. 2016 marked the 1000th official women’s ODI game. Australia consistently conquered the format, winning six World Cups and winning 80% of their games. No other side in the world would ever come close to the kind of dominance the Australian side had over the years.

The shortest version of the game, however, came in 2004 with the introduction of women’s Twenty20 International in which the innings per side was shortened to twenty overs. For the record, the number of games played till the end of 2006 was limited to four. But, the numbers began to increase gradually with the following years having six games in 2007, ten in 2008 and thirty in 2009. The first ever ICC Women’s World Twenty20 was also held in 2009.

The ICC gave full women’s Twenty20 International membership to all of its nations in April 2018. The Women’s Big Bash League in Australia opened up the doors for many cricketers all over the world to showcase their talent on the global level ever since its introduction in 2015. The semi-professional Women’s Cricket Super League was established in England and Wales in 2016.

The franchise cricket finally came to India during 2018 uplifting the morals of the Indian women cricketers. The competition was named Women’s T20 Challenge in which two teams fought for the trophy and the games were held between the playoffs of the Indian Premier League. The very next year, the tournament was enlarged to a three team competition.

The next step in the advancements of Women cricket came when the England and Wales Cricket Board officially announced their plans to expand the Hundred tournament back in 2018 and launched it in 2021. The Hundred competition began to be staged with both men and women matches taking place simultaneously.

The beginning of women’s cricket in India

1970 marked the beginning of women’s cricket in India when few passionate women decided to take up the sport. The game was still not legally structured at the time, but Mr. Mahendra Kumar Sharma, the original secretary, with the leadership of Begum Hamida Habibullah formed the Women’s Cricket Association of India (WCAI) under the Societies Act in Lucknow in 1973. This was a huge blessing for the numerous aspiring female cricketers. The WCAI was also granted status in the International Women’s Cricket Council (IWCC) that year.

The year from 1970-73 saw a lot of women cricketers turning up more towards the sport. They have almost taken nine months out of twelve a year playing cricket. The very first Women’s inter-state Nationals was held in Pune in April 1973 with only three teams. Maharashtra, Bombay and Uttar Pradesh were the first three teams to represent themselves in the competition. The number gradually increased from three to eight from the second edition held in Varanasi.

The executive committee was altered after the second National held in Varanasi with Mrs. Chandra Tripathi and Mrs. Pramilabai Chavan taking the positions of chairperson and president respectively. The initial days and many of the struggles during the development of women’s cricket in India was spearheaded by these two women along with the founder secretary Mr. MK Sharma. The list of competing teams had increased to 14 even by the time that the third tournament was staged in Calcutta. Following that, all states participated. Eventually, Railways and Air India hired female cricketers, who competed in different teams.

Other competitions were subsequently added. In 1974, Kanpur hosted the inter-zonal limited-overs event known as the Rani Jhansi Trophy. An inter-university competition was conducted at Rajkot during the same year as a part of the evolution. There were additionally sub-junior (U-15) and junior (U-19) competitions in which a lot of people came for participation. The champions of each of these regions competed for the Indira Priyadarshini Trophy, while the champions of the Nationals competed for the Rau’s Cup versus the Rest of India squad.

The very first bilateral series of women’s cricket was staged after a long five years of domestic cricket in the year 1975 in which the U-25 team of Australia visited India for a three match Test series. The initial venues for the tour were Delhi, Pune and Kolkata. The three games also featured three different captains Ujwala Nikam, Sudha Shah, and Sreerupa Bose. Right after the series India faced New Zealand, England, and West Indies in both home and away matches.

Interestingly, the matches saw all England players in skirts while both Indian and West Indies used trousers while playing the same. The first ever international match involving the Indian women’s senior team was against the Carribean side on October 31, 1976 in Bangalore. The six-match test match eventually ended in a draw with each team winning one game each. The matches were played for three days when it came to the women’s test back in the day.

The first ever ODI match involving the Indian women’s team was played in the 1978 World Cup. The magnum opus hosted in India involved four international teams including England, Australia and New Zealand. India had a tournament to forget as they lost all three games. The Indian team was captained by Diana Edulji. The WCAI also received International recognition in the same year from International Women’s Cricket Council (IWCC).

The first even win for the Indian Women’s side came against New Zealand back in 1995 when they won the ODI series in Centenary Celebration which then turned out to be the source of empowerment needed for the side because their first victory came after 17 years of hard fought cricket. Shanta Rangaswamy, Diana Edulji, Sudha Shah, and Sandhya Agarwal all made significant contributions and impacted the sport. The government of India then decided to honor these women cricketers and their accomplishments by bestowing the coveted Arjuna award for all of them.

All through this journey, there were some milestone breakers like Shanta who recorded the first ever century from an Indian women cricketer in the international arena. Sandhya Agarwal registered a world record of 190 runs in an innings during a test match against England in 1986. The best ever bowling figures by an Indian cricketer is in the name of Neetu David who ended with figures of 8-53 against England in the 1995-96 Test match.

After not having won a single game in the 1978 World Cup to make the finals in 2005 and 2017, between a miniscule attendance in the 1970s to a viewership of over than 85,000, Indian women’s cricket has progressed tremendously.

The Future of Women’s cricket in India

The women’s cricket in India has come a long way ahead with the course of time that it is believed that a female version of the Indian Premier League is also going to kick start soon. It is reported that the BCCI is in search of a window in March-April to host the WIPL 2023. The Women’s T20 Challenge is a Twenty20 cricket event conducted since 2018. The competition involves three teams that compete in a round-robin group before the final.

The BCCI has already announced that the Women’s IPL will begin in 2023 replacing the Women’s T20 challenge and also increasing the number of teams up to six. The board has already identified two openings, April-March and September-October, but while considering the heavy workload during the final part of the calendar the council prefers to host the tournament in the initial time frame. It is reported that the BCCI was in discussion with ECB and CA for a March-April window and they are in talks with the ICC to allow them a separate window for Women’s IPL.

The BCCI has stated that the Women’s IPL will most likely begin next year. Several players, particularly Smriti Mandhana, Harmanpreet Kaur, Alyssa Healy, Suzie Bates, Heather Knight, and Punam Raut, have shown their enthusiasm for the competition as the year has proceeded. If  the Women’s T20 Challenge would be any indication, potential in Indian women’s cricket is just yet to be discovered.