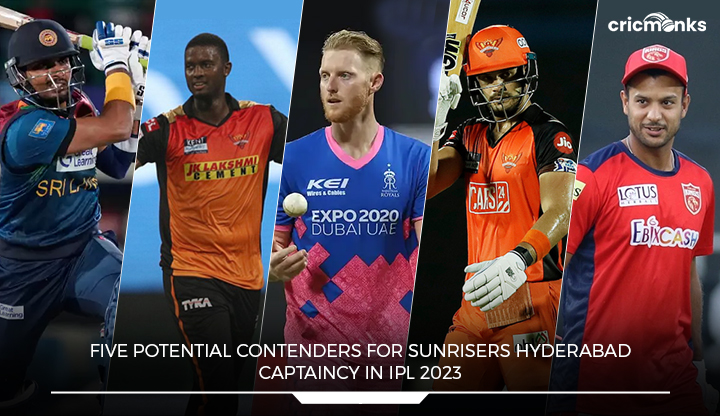 Dasun Shanaka has been a revelation for the Lankans ever since he took over the captaincy. The Sri lankan side were under pressure after the retirement of many of their senior players and Shanaka with his all round abilities has played a vital role in the upbringing of the inexperienced side. He has had a considerable accomplishment as Sri Lanka’s skipper in 2022. The Islanders didn’t have the greatest team in the Asia Cup 2022, however Shanaka guided them to victory. Shanaka is yet to be a part of any IPL side till now. He has an impressive international record and he has led Sri Lanka to 21 T20I victories. He also has respectable figures for a pace-bowling all-rounder. The Sri Lankan skipper might be a long-term solution to Sunrisers Hyderabad’s leadership conundrum.

Jason Holder is the current captain of the West Indies side in the longer format. He has established himself as one of the top performers for the national side across formats and has played many T20 leagues across the globe as well. Even though he is considered as a Test specialist, he has always showcased his all round skills in the other two formats as well. He is one of the most underappreciated all-rounders in T20 international cricket. He collected 14 wickets in 12 games for the LSG previous year. Holder, on the other hand, was not given enough opportunity to show off his hitting abilities. He had previously played for SRH and participated in their success. He scored 167 runs and took 31 wickets in 16 games for the Orange Army. Given his expertise as West Indies skipper, Holder might be a wildcard candidate to command SRH.

Mayank Agarwal could automatically become a prime choice if SRH does not sign Kane Williamson in the IPL 2023 Auction as they will require a new frontline batsman. Mayank Agarwal is a natural match for the opening and captaincy skills that is required for the side. Agarwal led the Punjab Kings last year and had a decent run as well. Although he did not have a very successful IPL 2022 campaign, he remains one of India’s top batters.  He only needs one solid knock to regain his form, and SRH should consider enrolling in his talents. Playing an Indian batter as the on field captain enables the management to freely rotate the foreign players in the side according to conditions. So, there is a high chance that the side would look to fill in a spot with an Indian international as captain. He has enough experience leading the domestic sides in the Indian circuit.

Ben Stokes needs no introduction as he is an out and out all rounder who would contribute in all three facets of the game. Any side in the world would love to have a player like Ben Stokes up their sleeves. He has demonstrated his ability to win matches in all three versions of cricket. During the 2017 IPL series, the veteran campaigner was named the most effective Player of the Tournament. Furthermore, Stokes has performed admirably as England’s Test leader. He was a part of the Rajasthan side the year before last year and had to pull out of the last season. He chose not to participate in the IPL 2022 auction after being released by the Rajasthan Royals. He has an outstanding reputation as a leader and all-rounder. Stokes might resolve a lot of issues for SRH if they can get him in the IPL 2023 Auction as he is a proven matchwinner.

Aiden Kyle Markram is a useful batsman who managed his country’s under-19 cricket team to victory in the 2014 ICC Under-19 Cricket World Cup. Ever since he became a middle order batter in the limited overs side he has shown enough maturity. He used to be a regular opener for the South African test side and has rediscovered himself as a powerful batsmen in the middle order for the limited over sides. When he became a part of the SRH side, he continued to do the same role and has helped the side overcome many crisis situations. He is someone who could bring some calmness in the dressing room and has enough prior experience with the players in the side as well. He could become a heavy contender to become the captain of the SRH side this year if they are not planning to buy someone in the upcoming auction for that specific role.