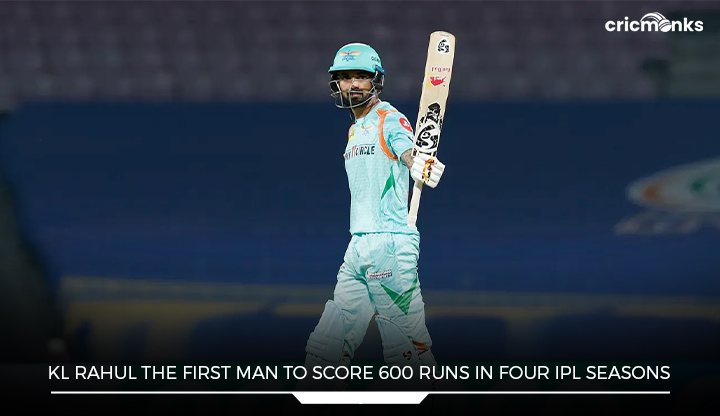 KL Rahul is at the pinnacle of run scoring ever since he started playing in the IPL. He is a constant member of the Indian national side and many pundits consider him the next captain after the end of the Rohit era. But, right now he has made his presence in the history books as he became the only batter in the entire history of the IPL tournament who managed to cross the landmark of 600+ runs in four seasons.

He has scored a mammoth 616 runs tally from the 15 innings he batted for LSG at an average of 51.33. What was impressive with this performance was that he has improved his strike rate from last year making it 135.38. He scored a hundred along with four fifties in this year’s tournament and played a vital role in qualifying LSG into the playoffs. He led his team from the front by making sure that they never failed to score runs in the competition.

One impressive thing about the game of KL Rahul is his ability to shift gears during the innings. Even though he starts slow while playing for the franchise side, once he gets to the set, it is near impossible to get rid of him. Last night was a perfect example. He has batted out half the innings but fate was against him at that point in time.

The dream of the LSG skipper was shattered once he was caught at fine leg trying to scoop Josh Hazlewood during end overs. That was the moment when the people in both camps knew that the game was wide open. A certain win was assured up until the LSG skipper was present on the crease. They eventually got defeated by the Royal Challengers Bangalore in the eliminator by a mere 14 runs.

KL Rahul produced one of the finest knocks in the knockout, scoring 79 off 58 balls. But that was just not enough as they were chasing a mammoth total of 207 put up by the RCB batters courtesy of a century from Rajat Patidar. Rahul’s highest score of 103* runs off 60 balls came against Mumbai Indians this year.

All of these runs demonstrate that the Karnataka batsman is by far the most persistent batter in modern IPL statistics, despite winning the Orange Cup only once in the 2020 year. That season, the competition was held in the United Arab Emirates. Prior to Rahul, two IPL legends, Chris Gayle and David Warner were at the top of the leaderboard, having already scored 600 runs 3 times in this event. KL Rahul has now moved them to second place after claiming the top spot by reaching that mark 4 times. This season, he stayed second in the battle for the Orange Cap, trailing Rajasthan’s Jos Buttler (718 runs).