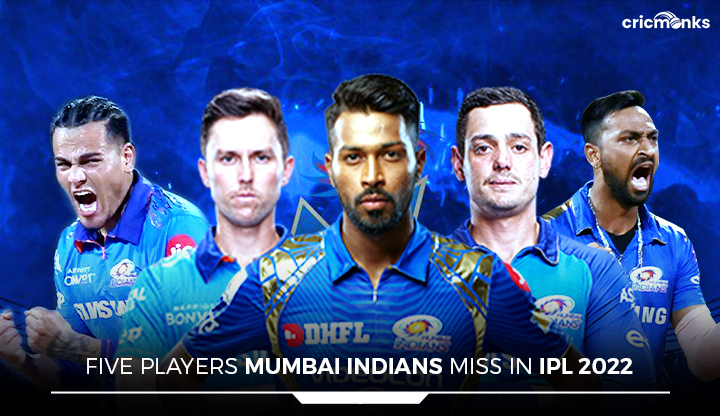 Hardik Pandya made his debut for Mumbai Indians back in 2015 and from there he grew himself to become one of the fearsome hard-hitting all-rounders India has ever produced. He was the heartbeat of the Mumbai side who had allies with the Caribbean superstar Kieron Pollard down the order. He has given his full commitment to both departments at crunch moments which includes wickets in the middle overs as well as last over bashing at the end. He was quite impressive in the 2019 season when he scored 402 along with 14 wickets. He grew with the Mumbai Indians to successfully become one of the biggest match-winner in the whole competition. He became a pivotal figure in the next season by playing a crucial role in the fifth title victory for Mumbai Indians. Now, he was picked by the Gujarat Titans and is the leader of the side.

Krunal Pandya has been one of the criminally underrated players on the Mumbai side. He has been largely economical with the ball and also chipped in with runs whenever required. He was the kind of player any side would wish to have with them. He made his debut in the 2016 season where he scored 237 runs with the bat and followed it up with 243 runs in the next edition along with 10 wickets to his name. He was monumental in the third title victory of Mumbai Indians where he scored a fighting 47 off 38 balls with the bat which became crucial in the final against the Rising Pune Supergiant. He slowly began to reinvent himself with the ball in the following editions whenever he became average with the bat. In the latest edition of IPL, Krunal was picked by the Lucknow Supergiants.

The young leg spinner from Bharatpur was picked by the Mumbai Indians ahead of the 2018 edition of IPL and slowly became a part of the core. He was sidelined for that year although he was a part of the side. He made it to the XI in the following year and made a mark for himself by picking 13 wickets in as many matches. He cemented his spot in the XI and became the lead spinner of the side in the coming year and picking up 15 wickets and following it up with 13 wickets in the 2021 edition. Chahar was one of the finest findings of the Mumbai franchise which in fact ended up in a spot for him in the squad for the T20 world cup ahead of the veteran leg spinner Yuzi Chahal. He was picked by the Punjab Kings ahead of the Mega auction and is now playing for them in this year’s IPL.

Quinton de Cock has been a special player and never disappointed any of the franchises he has played for in his career. The South African wicket-keeper batter made it to the Mumbai side during the 2019 edition after being traded from the Royal Challengers Bangalore. He was impeccable in that season scoring 529 runs in 16 matches and was also the third-highest run-getter that season. He was monumental in the fourth title win for the Mumbai side in the IPL. He followed his special performance with 503 runs in 16 during the next season. He became the sixth highest run-getter in the 2020 edition and became one of the primary reasons for Mumbai being able to defend the title once again. He toned down a bit by scoring only 297 runs in 11 innings in the lasr season and now he was picked by the  Lucknow Super Giants.

The modern-day great, the Kiwi thunderbolt became a member of the Mumbai family only in 2020 after the exit of Malinga. He filled in the big shoes of Malinga by becoming the bowling partner of Jasprit Bumrah on the Mumbai side. He was unplayable during the opening spells and every franchise could bank on him for a few wickets in the powerplay. He has this unique ability to swing the ball both ways and always get the better of the opposition batsmen. Boult made an immediate impact for Mumbai by picking 25 wickets in that season with 15 appearances. He followed it up with 13 wickets to his name in the 2021 edition. Boult is now part of the Rajasthan Royals who picked him up at the mega auctions.