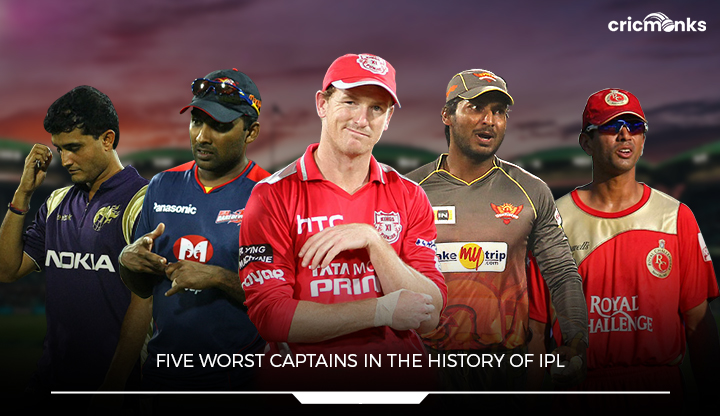 Captaincy is one of the toughest jobs in cricket. Especially in T20 cricket, captaincy is extremely crucial. A smart bowling change, a slight field alteration, or the person’s leadership abilities may all make a significant impact on the format. This role becomes even more vital in a high-pressure event like the Indian Premier League (IPL), where teams play continuous cricket for roughly two months.

While there have been numerous outstanding leaders in this competition throughout the years, others have failed horribly. Among the worst leaders in the IPL are a few individuals who have led their various international sides to great success. Only leaders who have led in at least 25 matches were included in this list. This list is ultimately based on the captains with the lowest victory percentage.

Here are five IPL captains that have failed miserably in the IPL:

Kumar Sangakkara is one of the legends of the game, especially when it comes to Sri Lankan cricket. He is one of the finest left-handed batters the world has ever witnessed. He is an inspiration to many of the upcoming Sri Lankan cricketers. He has led the Sri Lankan side towards victory numerous times and has reached the finals of the ODI World Cup of 2011 as well. He is a skilled tactician who guided his side to the World Cup 2011 finals. In 2009, the wicket-keeper batsman commanded the squad for roughly two years. He has a solid track record in all formats. Sangakkara won 5 of 15 Tests, 27 of 45 One-Day Internationals, and 12 of 21 Twenty20 Internationals. Unfortunately, the Lankan legend holds the record of having the worst winning record as a captain in the IPL. He played for the Kings XI Punjab at first and then shifted to Deccan Chargers of Hyderabad. He also captained the Sunrisers Hyderabad during his IPL career but has the worst captaincy record among others in the league. He has won only 15 matches out of 47 games captained by him and lost the remaining 30. He has the least win percentage of 31.91 in comparison with captains in IPL who have captained a minimum of 25 games.

Mahela Jayawardene is one of the skillful batter and captain in the International arena. He plays the ball with silky smoothness and has a great tactical brain as well. He has received several awards for doing this responsibility at the greatest level. In addition to being awarded ICC Captain of the Year in 2006, he also received the ICC Spirit of Cricket Award in 2013. He won 18 and drew 8 of the 38 Tests in which he captained the Island country. Jayawardene has also played a lot of limited-overs cricket. He won 68 of 126 One-Day Internationals (ODIs) as captain. Furthermore, he was the first to captain Sri Lanka in T20Is. His IPL experience as a skipper, though, has not been beneficial. The renowned batsman captained three sides in a total of 30 games, winning only ten.

It is obviously surprising to see Sourav Ganguly, the great former Indian leader, on this chart. He is widely recognized as one of the best leaders to have captained the Indian squad. Dada gave the team a competitive taste and showed them how to overcome adversity and win difficult matches. Under his leadership, the team won 21 tests, 11 of which were away from home. He ultimately formed the new India with aggression and played a large role in shaping up the Indian side. He also led the ODI team for six years after taking over following the match-fixing scandal. He won 76 of 146 matches and was inspiring. The T20 game, on the other hand, is a different ball game, as the Bengal player discovered the hard way. He had never participated in a T20I match, and he struggled in the IPL. The Prince of Kolkata began his career with KKR and later went on to PWI. But he struggled to lead both of these groups. He was past his peak and had already departed from international cricket when he began participating in the IPL.

George Bailey is another talented overseas captain who has failed in the IPL. He played in 125 international matches for Australia. Bailey is just the second Australian to lead an international match despite having never played at the top level. The Tasmanian captain led the Kangaroos in 29 One-Day Internationals and 28 Twenty-Twenty Internationals. In both forms, he won 16 and 14 games, respectively. Given his record of success, Kings XI Punjab chose him as captain in 2014. He had an incredible run as a captain that year as the side finished in the finals of the year. Unfortunately, Bailey was unable to repay the confidence, and the team struggled through many of the most humiliating losses during his tenure. The Australian captain led the squad in 36 games but only won 16. While the squad finished second in 2014, they finished at the bottom of the table in 2015.

Rahul Dravid is one of the finest Indian cricketers of all time. He is known for consistently giving the priority to the team first and performing with skill sets by giving anything that was required of him. He rarely backed aside from responsibilities, whether it was batting at various places or maintaining wickets. ‘The Wall’ led the Indian squad in 25 Tests, winning eight and losing six. His ODI record is equally impressive. Dravid guided the side to 42 victories in 79 games, which is respectable. Dravid struggled in the T20 format, a version where he isn’t the smartest choice. The runs he earned did not come quickly in the format. Despite his lackluster leadership record, he motivated the youthful sides he was a member of. His record isn’t perfect, but he’s made a substantial impact on the development of a few of the game’s top players.