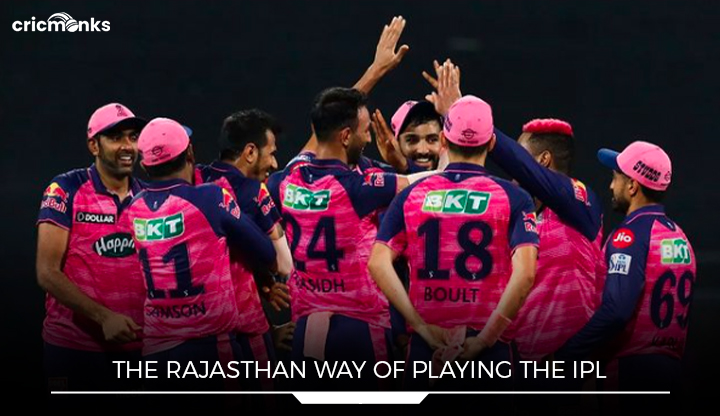 The Rajasthan Royals, who were the champions of the inaugural edition of the IPL, have made it to the finals of the TATA IPL 2022 to face off against the Gujarat Titans. All of the cricket fans were anticipating the big guns like the Mumbai Indians and Chennai Super Kings to get through to the playoffs, but Rajasthan has outplayed the critics and rivals to emerge as one of the most successful franchises this year.

Heading into the mega auction, the Royals named only three retentions including skipper Sanju Samson, vice-captain Jos Butler, and the young prospect Yashaswi Jaiswal. They were the only team that had no bowlers on their side after retentions. Rajasthan sealed their top three and went into the auction for some quality bowlers.

The success of every team lies in the quality of their five bowlers, and Rajasthan was highly fortunate to scalp some of the best in the business. They made the Indian spin duo of R Ashwin and Y Chahal their prime spinners, along with the highly destructive Trent Boult and Prasidh Krishna. They had four quality international bowlers on their side, along with the three retentions at the top to make their core the strongest in the competition.

The think tank of Kumar Sangakkara who serves as the Director of Cricket for the Royals went for some power hitters in the form of Shimron Hetmyer and Jimmy Neesham. But, they also went for the classical Devdutt Padikkal which created some echoes because of the fact that the royals already had a lot of opening options.

But, this is where things got really interesting as they played Devdutt in a different position, recognizing his skill at maneuvering the ball during the middle phase of the innings. He is a classic batter who can score a lot of runs off both spin and pace during the middle overs without taking too much risk.

This strategy has worked wonderfully for them because number four is a spot where most of the teams would go for an all-around option. But, instead, the Royals created a team where each player has a primary skill. The top five Royals include Butler, Jaiswal, Sanju, Padikkal, and Hetmyer, who are formidable and destructive. Just like the batting department, the bowling department of Rajasthan is enhanced by Boult, Prasidh, Chahal, Ashwin, and Kuldeep Sen.

Five pure batters and Five pure bowlers along with the power hitter Riyan Parag who is better known for his fielding rather than his batting or bowling, make up the Rajasthan Side for IPL 2022. The strategy of RR is quite simple. The batters who are one-dimensional, do their job without fail and the bowlers do the same. In this way, they were able to overcome the myth that limited-overs cricket needs a lot of all-rounders.

In their most recent match against Lucknow, the opposition had literally nine bowling options, in which they used eight, and still, the skill level of the Rajasthan bowlers made sure they defended the target successfully. This proves that having a few bowlers who are masters of their craft is far better than having a lot of options heading into the match. This applies to batting also. Fielding a team full of all-rounders is never worthwhile if they are not able to do justice to either single one of their skills.

Rajasthan has a bunch of players who shine at their primary skills. That’s why they are leading the charts in both departments. They have both orange-capped and purple-capped players in Jos Butler and Yuzvendra Chahal. They have good support in their departments from Sanju Samson and R Ashwin, respectively. Their core players and their performance were the primary reasons that the Rajasthan franchise was able to outshine some of the other sides of the competition.