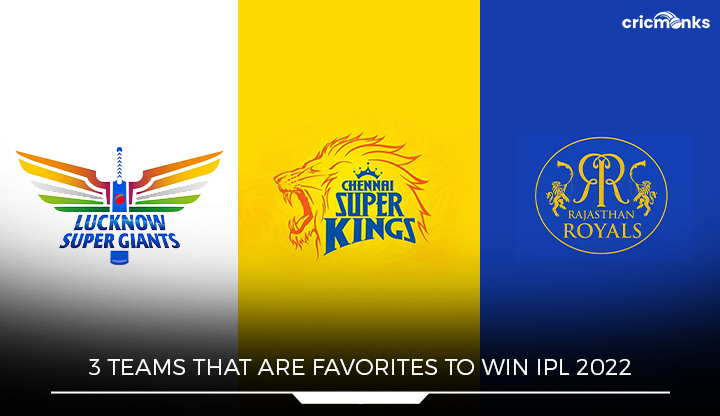 The mega auction of the IPL 2022 is over, and every team is filled with superstars ready to light up the big stage. Every IPL team looks solid, and each one of them is anticipated to come up big once the occasion gets going. All the teams are power-packed, including the two new additions of the Gujarat Titans and Lucknow SuperGiants. The starting XI of each team is under discussion as fans are excited to see all the superstars back in action. Due to the obvious scarcity of high-caliber athletes, neither club is without holes or flaws. Given their high preservation, even titans like MI and CSK are suffering due to the unstable arc characteristics. Each franchise has a weakness that can be exploited. Even though most of the teams are neck to neck on the table, the analysts have already begun to discuss the possible contenders for the title. In this article, we will be listing out the top three teams that could have a stronghold on the IPL 2022 title.

Lucknow has an astounding collection of a total of 8 all-rounders. Unquestionably, the Super Giants have astonished everyone with their apt signature.  Unlike the other teams, their lower-middle order is accurately well stacked. The franchise with the help of its skilled support staff has built a powerful squad.

Omitting them, the likes of Stoinis, Hooda, and Krunal Pandya can dwell themselves as per the condition. As regards their batting, the opening pair of KL Rahul and Quinton de Kock looks suitable. Extensively, this batting lineup can fancy their chances to pursue any IPL target. Even Manish Pandey at number three looks like a firm brick. At number 7, the tall Jason Holder then becomes the icing on the cake.

Overall, if LSG enjoys full availability of its front-line players then conclusively IPL 2022 can be their maiden glory. Usually, the likes of Holder, Ravi Bishnoi, Mark Wood, and Avesh Khan will be the vital cogs. Although that bowling-wise, there is not much intensity beyond their battlefront players. Especially with regards to the Indian stride attack, Avesh Khan doesn’t have a solid backup.

The yellow army is abutted with depth and assets just like IPL 2021. CSK in IPL 2022 looks equivalent to the previous season. The team management has tried hard to sack players who are uniform for their playing pattern. In total, they carry a mass of 8 all-rounders. In the lower middle-order, the likes of Jadeja and Shivam Dube add extra force.

Initiated with their batting section, the likes of Devon Conway and Ruturaj Gaikwad restore their old opening fusion. Beneath them, even floaters like Moeen Ali and Ambati Rayudu are sewn-made for the central passage of play.

In general, the defending champions have sewed a dynamic batting order much like the last season. Even underneath them, the bowling academicians like Deepak Chahar and DJ Bravo protract their entire batting. Mitchell Santner as well as the mystery spin of Mahesh Theekshana is also available in the spin department. In their overseas spearheads, there’s an extra pace of Adam Milne and even Chris Jordan is a fascinating backup Bravo.

However, with respect to bowling, the franchise has done sufficient shopping. Regulars like Deepak Chahar and DJ Bravo are expected to tiller at the beginning and bowl in death overs. CSK is well occupied both in terms of the team balance and resources. However, the ongoing detriment to Deepak Chahar might put them in shambles, especially with respect to the backup of local pacers. Or else, the defending champions do contain a similar lineage to win their fifth title.

The lower middle-order looks very competent like never seen before. The franchise has intensified its spin bowling in the ultimate auction.  However, with respect to all-rounders, RR has just five of them. luckily in IPL 2022, the Royals have made a very decent team.

Both young bombs – Padikkal and Yashasvi Jaiswal will be the two openers In terms of the team combination. Under them, the team can launch their two huge stars- Sanju Samson and Jos Buttler. There are solid fiery options like Shimron Hetmyer, Riyan Parag, and Jimmy Neesham. However, Even in the lower middle-order. The only downgrade they will be facing will be the fifth bowling option of Neesham and Parag combined.

Denoting spinners, RR has made a good decision by picking veterans like Yuzi Chahal and R Ashwin. Perhaps with regards to pace, the similarities of Trent Boult and Prasidth Krishna will hunt in the team. The pink army has a team of experienced bowlers   Especially Interestingly, there’s also the availability of Navdeep Saini to join as either a third pacer or a replacement.

RR will also have auxiliary cricketers like Rassie van der Dussen, Daryl Mitchell, and Obed McCoy as reserves Supporting its vital gear. After so long the RR family looks intense and fully prepared to own its second IPL label.