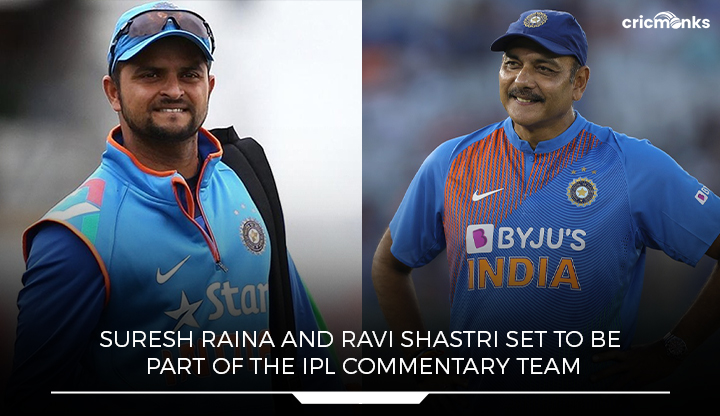 The former Indian Team head coach turned star commentator Ravi Shastri is making a comeback into his strong zone along with the debutante Suresh Raina. Ravi Shastri after his retirement from international cricket, turned into a full time commentator. He was a part of some of the most astonishing moments in cricketing history. His voice has echoed in some of the most fascinating moments in Indian cricket including Yuvraj Singh’s six sixes in an over and MS Dhoni’s finish in the ODI World Cup 2011. He has made a mark for himself in the commentary field for many years after finally shifting his focus on to becoming India’s full time head coach in all formats. But now, after making way for Rahul Dravid to be the head coach of the Indian National Men’s Cricket Team, Ravi Shastri is coming back to commentary which is his forte.

Along with him, the ever consistent Mr. IPL Suresh Raina will also take up the new career in his life. It will be the first time in the history of IPL that Suresh Raina will not be  part of any of the franchises in the competition. He was unsold in the mega auction that took place ahead of this year’s IPL in Bengaluru. Fans expected him to be a part of at least the new franchise given the fact that he was let down by his own Chennai Super Kings as well as the other franchises. The left hander tried his best in the last edition as well but was unable to find his feet when it mattered the most. There had been several  players that pulled out of the tournament at the last minute and even after so many teams are desperately trying to fill the spots, Raina has not been considered by any of the franchises. Right now, he will be stepping into this new phase of his life as a commentator during the start of the new season of IPL 2022.

Ravi Shastri has been the pioneer of Indian cricket for so many years and he was a part of the iconic Indian team that won the first ever world cup led by the great Kapil Dev. After that he used to be one of the greatest Indian commentators of all time and the intensity that he brings through his voice with the immense amount of depth and feel is simply irreplaceable. He has ruled the cricketing world as a commentator and crowd favorite for many years and shifted his career to become one of the most impressive coaches of India. He made many overseas series of his own along with Virat Kohli and Ajinkya Rahane and wrote his name in the history books as one of the better coaches ever to have associated with the Indian team over the years. He had triumphs in most of the SENA countries and was a part of the team twice when India beat Australia on their home soil.

The shift from Ravi Shastri to Rahul Dravid happened because of the loss of India in the recent T20 World Cup. He didn’t continue in the position of head coach as the team failed to live up to the expectations of the fans. He was approached by few of the franchises ahead of the IPL to take up the role of head coach but showed no interest as he wanted to be relieved from the hardship of being a full time coach. Shastri will make his first appearance as a pundit since being named team India’s head coach in 2017. Suresh Raina and Ravi Shastri will both be members of the Hindi commentary panel for the money-spinning tournament. Notably, this is a new position for the latter, who has generally commented on the game in English during his post-cricketing career.

“You are all aware that Raina will not be participating in the IPL this year, but we wanted to associate him with the league in some way.” He has a big fan base, and there’s a reason he’s regarded as Mr IPL. Shastri was a member of the Star Sports English commentary crew. “However, he did not commentate after the Champions Trophy final in 2017 because he became India’s head coach.” an IPL source said

It is also reported that Ravi Shastri is taking lessons on Zoom call with the help of an expert and he is also rehearsing the same to get back on the groove. It is important to note that for every skill set that the people possess, it needs practice and training. The fact that Shastri is ready to take up drills to improve himself because of him being not a part of this set up for a long time, speaks volume of the character that the former Indian coach has at his hand. Fans from all around the world would be pretty excited to hear the thundering voice of Ravi Shastri along with Suresh Raina which would bring in joy for everyone. Raina even though has done some commentary early in his career, has done it only in English and this would be a different challenge for him speaking HIndi and commentating addressing the whole nation of India.