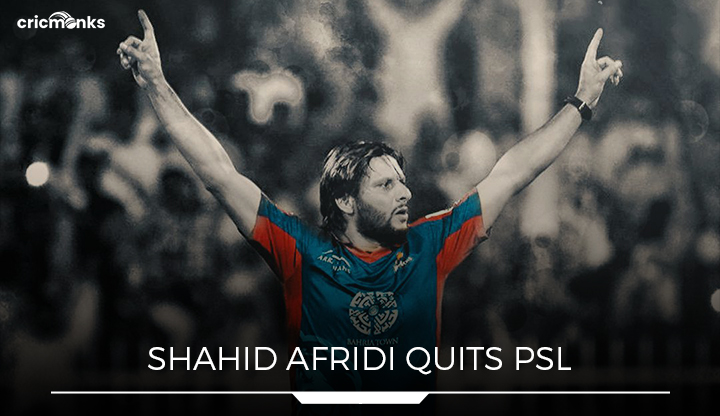 The ongoing season of PSL 2022 has fulfilled the dreams of every cricket fan as the tournament produced some of the finest cricket. It had all the thrills and funs that make it one of the most fascinating cricket tournaments going around. From power-hitting to some exceptional bowling performances followed by numerous close finishes and acrobatic fielding, the PSL 2022 came as a complete package.

The veteran superstar Boom Boom Shahid Afridi who was a part of the PSL 2022 is leaving the 22 yards after a long 21-year career. He had already told everyone before the start of this PSL that this would be his last tournament. Afridi who had already retired from numerous formats of the game before has also made shocking comebacks into cricket for the sake of fans. Afridi is someone who is emotionally attached to Pakistani fans and he is one of the primary reasons for the viewership of PSL across the world.

Afridi who was playing with a back injury throughout his career has now posted on his YouTube channel that he can’t continue playing in this edition of PSL due to intolerable back injury. He said that the injury is being worse than expected and the pain is now all over his body. Afridi had previously represented Peshawar Zalmi, Multan Sultans, and Karachi Kings in the PSL and was a part of the Multan Side who won the 2021 season.

“I wanted to end PSL on a good note but I have been playing with the lower-back injury for 15-16 years now and the pain is quite intense where I feel it in my groin, knee and even the fingers of the foot,” Afridi said as quoted by Cricket Pakistan.

Afridi also tweeted stating the same thing through a video on Twitter.

“Goodbye to PSL, My body is in serious pain,”

Shahid Afridi is one of the legends of the game when it comes to Pakistan cricket and he has been a star performing for which ever side he played throughout his career. He came into the Pakistan national squad as an all-rounder at the age of 16 and had an amazing prolonged career that lasted for 21 years. The famous 37 ball century which was held for a long period of time was smashed by Afridi in only his second ODI in 1996 against Sri Lanka. He held the record for the fastest century in the ODI format for almost 17 years until Corey Anderson outplayed him in January 2014.

Afridi played for different sides all throughout the PSL history and had to wait till he join the 7th edition as he was tested positive for Covid-19 days before the start of the tournament. He had a season to forget because his return match saw the second-highest runs conceded figures. Afridi gave away 67 runs in his quota of 4 overs. But, that doesn’t take away the good memories he gave for cricket fans all over the world.