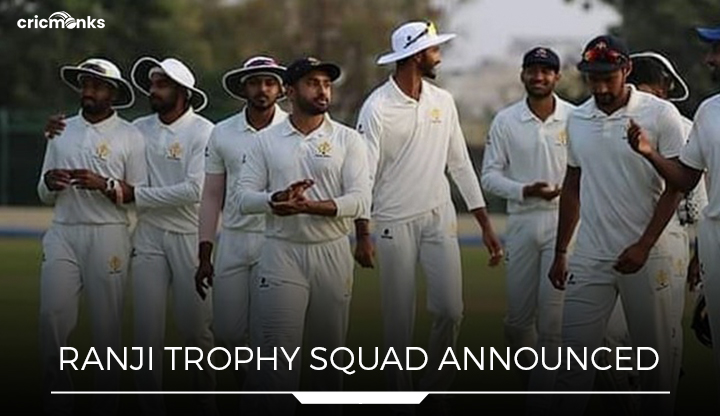 The Ranji Trophy is finally back after the termination last year which was the first time in 87 years of rich history. One of the most intriguing things about this year’s competition is that we will be witnessing the return of the two pillars of the Indian national Test side. The experienced duo of Cheteshwar Pujara and Ajinkya Rahane was put under a lot of scrutiny by both critics and cricket lovers for underperforming in the big stages. They were under the scanner in the Test format for not being up to the mark even after getting back-to-back opportunities. The backing given to the senior men in the Test squad was in fact an issue for the youngsters in the squad who were waiting in the wings for an opportunity. Pujara will be playing for the Saurashtra team led by Jaydev Unadkat and Rahane will be representing the Prithvi Shaw-led Mumbai side.

Pujara and Rahane have been the regular starters of the Indian Test side for a longer period of time and they both lacked the consistency of late. They started getting out on single digits regularly on big matches and played a crucial role in the defeats that the Indian teams suffered in the past two years. The last century by Rahane came against Australia in the famous Melbourne Test in December 2020 and Pujara’s came three years ago against the same opposition in Sydney.

The average of Rahane was 20.25 after that and after 27 innings he managed to score only 547 runs that including three half-centuries with 67 being the highest score. He had a massive dip in his average which was 43 at one stage and became 39. He last represented the Mumbai side in the 2019-20 season in which the side managed only one win from the eight league games and was knocked out in the group stage itself.

In comparison, Pujara scored considerable runs than Rahane but has shown poor form than him recently. He was out for ducks in consecutive Test matches against England and South Africa. He scored 1287 runs from 48 innings at an average of 27.38 with a high score of 91 against England. His career average came down from 47 to 44.25. Pujara was a part of the Saurashtra side in the 2019-20 season, where he contributed largely with a steady 66 in the final which eventually helped his side win the tournament.

The league matches of Group D consisting of both these sides Saurashtra and Mumbai along with Odisha and Goa will take place at Ahmedabad.  The selectors will be keen on the performance of both these players as they were an integral part of the Indian Test arena for a longer period of time. The Ranji Trophy is scheduled to begin on February 16th and there will be a home series against Sri Lanka starting from February 25. The Ranji Trophy will be resumed after a year-long break. The competition was terminated last year because of the Covid outbreak. This time, the competition will be held in two phases between the IPL. The group stages will be finished before the start of the IPL and the knockouts and final will commence after the conclusion of IPL.

The star Indian all-rounder who is also an important member of the Baroda side has decided to skip the entire season of the upcoming Ranji Trophy competition. Pandya wants to focus more on his return to white-ball cricket as a full-time all-around player. Hardik Pandya had suffered a huge back injury back in 2018 and was taken for treatment. He was playing as a pure batter in the Indian limited-overs side for a long period of time and wants to skip the Ranji Trophy to focus for on rehabilitation to play as an all-rounder in the side.

Hardik Pandya was not involved in any kind of competitive cricket since the conclusion of the 2021 T20 world cup which was held in the UAE. Pandya was not a part of the Syed Mushtaq Ali T20 side last year or the 50 overs Vijay Hazare trophy as well. He last played a red-ball game back in December 2018. Hardik Pandya is set to make a comeback into the international arena through the latest edition of IPL where he will be leading the Ahmedabad Titans which is a new franchise added to the pool exclusively this year.