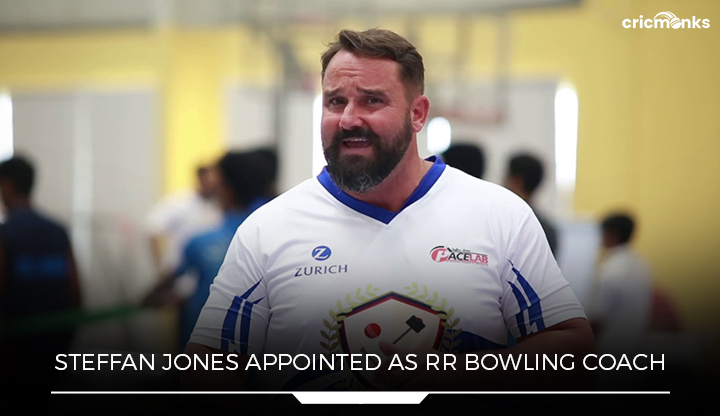 The latest edition of the much anticipated IPL is about to kick start in no time. The most exciting aspect about this year’s IPL is the return of the competition to its original place. The tournament is expected to be hosted on limited grounds with crowds being allowed. The fact that two new teams are being added to the roster only adds up to the excitement. It also means that the competition is only going to get much tougher and all the teams are trying their level best to strengthen themselves.

The maiden IPL winner, Rajasthan Royals, has appointed Steffan Jones as their pace bowling coach ahead of the new season to give necessary prominence to the pace bowling unit of the team. The 48-year-old veteran player will be responsible for guiding all the members of the Royals squad. The Rajasthan Royals made an official announcement through a press conference conducted on March 4.

Steffan Jones is a country mile ahead of most of the other coaches when it comes to experience, as he has served several county teams in England. He will be closely working with the squad before the season begins. A pre-season camp is to be conducted from March 7 to 10 in Nagpur. He is expected to remain with the squad during the entire season of the upcoming IPL tournament.

Steffan Jones, in his new capacity, will give valuable feedback to the bowlers of the Rajasthan Royals. Jones will also provide feedback to RR Academies throughout the world in order to improve conditions for aspiring players. All present and prospective Rajasthan Royals players will have the opportunity to practice in these camps under the constant guidance of Steffan Jones.

“I am happy to be back to the Rajasthan Royals and appreciative to the management for providing me with the privilege to work with the club yet again.” With a wealth of excellent bowlers in our ranks, I’m excited to work with them all year and train them to peak and thrive when the season arrives.” Jones was said in a release.

Kumar Sangakkara who is serving as the Director of RR also expressed his excitement of having Jones back in the setup. Jones, according to Sangakkara, “understands the culture of the club completely” and has previously been praised by both managers and players.

“Steffan has been intimately involved with the team over the past couple of years, so he knows the culture completely, and he carries with him a highly capable coaching approach, which has previously been praised by both players and management,” Sangakkara said.

“We are happy to welcome him back to the franchise in his new job, where he will be working with our bowlers and offering assistance to them throughout the year, and we are convinced that his knowledge can take us to greater heights,” he added.