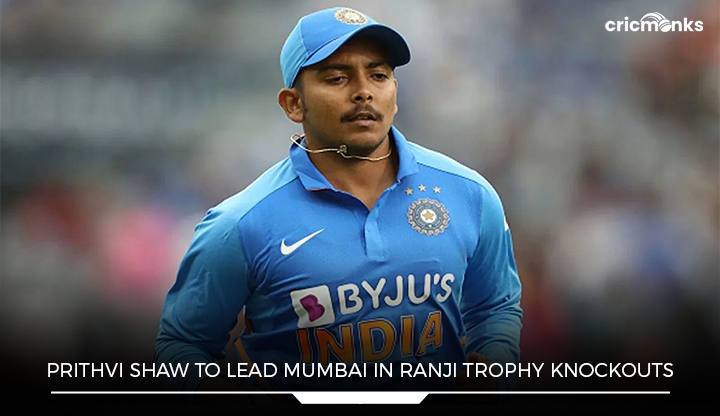 Prithvi Shaw became a sensation after helping the India U19 team lift the World Cup. Shaw is praised all over and people like Ravi Shastri have even showered praises on him by saying that he is a mixture of Lara, Sachin, and Sehwag. Even though he has debuted for the national side in all three formats, he is yet to cement his spot in the side. There is some serious competition going around in the Indian circuit to make it to the national side and Shaw is one youngster every cricket fan wishes to see opening the innings for India.

According to the latest news, Prithvi Shaw has been selected as Mumbai’s skipper for the Ranji Trophy knock-out stages, which begin on June 6 in Bengaluru. He has enough expertise to lead the side as he has previously won the U19 world cup under his leadership. Mumbai will face Uttarakhand in the quarterfinals, and the Salil Ankola-led senior selection board chose a 21-member side late on Monday. Shreyas Iyer will be unavailable for these games due to national commitments.

Shivam Dube and Suryakumar Yadav were also not selected due to injury concerns. However, the selectors have maintained their trust in Sarfaraz Khan, who had a solid IPL 2022 season with the Delhi Capitals. Yashasvi Jaiswal, who will start alongside Shaw, has also impressed the Rajasthan Royals this year.

As a result, the southpaw will be keen to create an impression for his state squad too. In terms of the bowling attacks, seasoned pacer Dhawal Kulkarni will head the attack, with Tushar Deshpande and Shams Mulani aiding them. Even with the unavailability of certain key players, the team appears to be well-poised and wants to turn up a powerful performance in the knock-out stages.

However, these games will be crucial for Shaw, who has been on the fringes of the Test team for some time. He last featured in a Test match in December 2020, against Australia, when he struggled. His lack of technique to counter the pace of Aussie quicks was exposed. India has plenty of talent right upfront and what makes Prithvi different from others is his aggressive gameplay.

With Mayank Agarwal, Rohit Sharma, KL Rahul, and Shubman Gill already vying for the two opening berths, Shaw will need to put up a strong performance to catch the eye of the officials. Right now he is not selected in both the limited-overs and Test side. So, he could certainly take up this opportunity to go big and make a statement for himself.

In terms of Mumbai’s record, they won the first two of their three group stage games while drawing the third. While they will be favorites against Uttarakhand, they should not be casual.