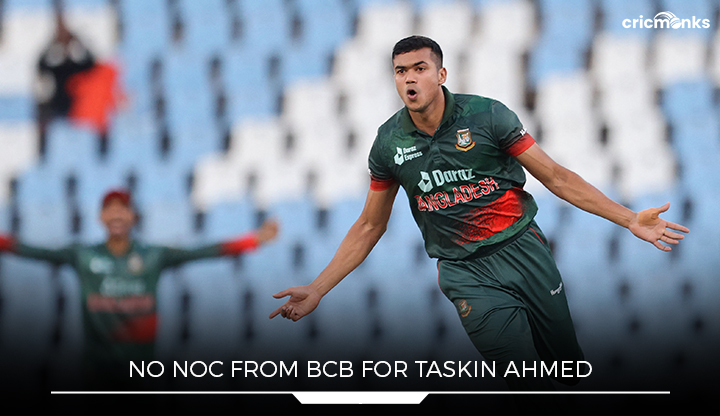 The 15th edition of the Indian Premier League is ready to kick off and a lot of players have already ruled out or pulled out of it due to several reasons. Add to that the English pacer Mark Wood who has suffered a massive injury and been ruled out for the entire IPL season. Wood was considered one of the primary choices for the Lucknow franchise in the bowling department and this has given a huge bowl for them as there are no real quality backups in place for him.

It was reported that the team mentor Gautam Gabhir was keen to get the Bangladeshi pacer Taksin Ahmed in place of Mark Wood for the entire season. However, there was no official confirmation regarding the same. But now, it is seen that the Bangladesh Cricket Board has rejected the offer and are not interested in providing the player with No Objection Certificate (NOC) by the board which is necessary while playing in the IPL. The Lucknow franchise had approached BCB and the board had completely denied the offer for Taskin Ahmed.

Jalal Yunus, the chairman of the BCB cricket operation, revealed that authorities had met with Taskin Ahmed and that the player had previously notified LSG of his inability to participate in the IPL. “Because we have two major series, including the present home tour of South Africa and the home series against India, we believe it would be inappropriate for him to participate in the IPL.”

“We spoke with Taskin, and he realized the entire scenario.” He told the franchise that he will not be playing in the IPL and will be eligible for the South Africa trip before returning home,” he stated to the media.