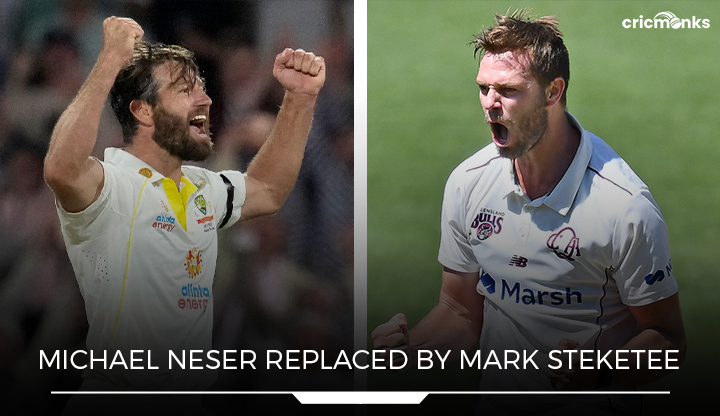 The long-awaited Test series between Australia and Pakistan will take place in Pakistan from the 4th of March. It will be an all-format bilateral series in which the mighty Aussies will be touring Pakistan since 1998. The tourists earlier announced the squad led by the pacer Pat Cummins with Steve Smith as his deputy. The Aussie side is now struck with an injury concern situation with only a few weeks remaining for the series. Even though these are worrying signs for the side, the domestic system of Australia has helped them with having good international quality replacements.

Michael Neser made his Test debut this summer after waiting in the wings for an opportunity and now he has been ruled out of the side for the Pakistan tour due to a side strain sustained during the Marsh One-Day Cup match in Brisbane. It was a wonderful opportunity in the hands of the Queensland pacer to showcase his talent in the away tour. Cricket Australian had announced a huge squad consisting of 20 players including standby due to Covid concerts. Neser suffered the strain during the One-Day Cup and he is highly unlikely to return to action. He was fortunate enough to represent his national side only once during the second Ashes Test against England at the Adelaide Oval.

This strain which happened to Michael Neser during the match between Queensland and New South Wales meant that he will miss the entire Pakistan Test series. He was all set to make a statement for himself on the biggest stage with whatever limited opportunities he get there. However, he will have to wait for more till he makes it back into the side to make the ball do the talking. Neser is already 31 years old and it is so tough to make it to the Australian national side due to heavy competition among players. The Marsh Cup provides an incredible platform to the Australian players.

The injury of Neser happened during the warm-up before the One Day Match. He tried his best to get back on the field and give his maximum for the side. At last, he had to pull out after bowling a couple of deliveries which came out as wide balls. He was unable to continue in the match and had to walk off the field. The injury of Neser has now opened the doors for his fellow Queenslander, Mark Steketee who has now been called as a replacement in the squad. Australia is already touring in the absence of a promising young pacer Jhye Richarson. He has been rested in order to manage his workload.

Steketee was one of the standby players of the tour before securing a place in the squad. He is the leading wicket-taker in the Sheffield Shield tournament this season and has picked up 29 wickets at an average of 16.31 in just five matches. He had already been on the verge of a Test call-up, being a member of Australia’s team for last year’s aborted Test trip to South Africa.

The first Test between Australia and Pakistan starts on March 4 in Rawalpindi.