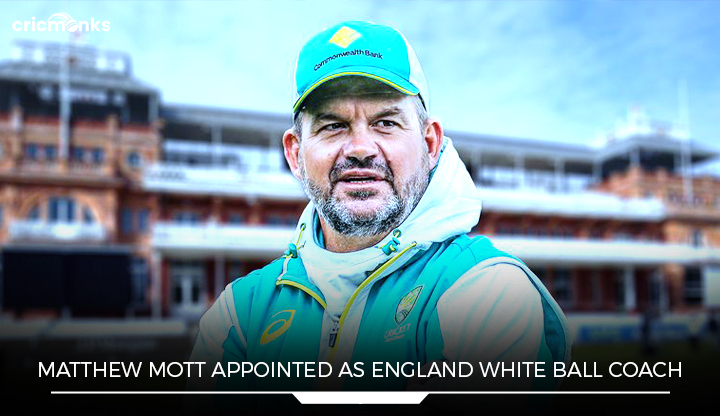 Matthew Mott who was the former Australian women’s team coach is now officially appointed as the new England limited-overs head coach by the ECB. Matthew Mott became the frontrunner for the job among many others who had applied for the job. Mott has reportedly resigned the post as Australian women’s coach to join England. He will start his tenure with the England limited-overs side with the upcoming three-ODI series against the Netherlands.

The ECB selection panel also had a liking for England’s former white-ball captain, Paul Collingwood, but Mott had risen as the prime candidate for the job. The panel consisted of Chief Executive Officer Tom Harrison, Managing Director of England’s Men’s Cricket, Rob Key, Strategic Adviser Andrew Strauss, and Performance Director Mo Bobat. The appointment of Matthew Mott as the England white-ball captain happened after the board decided to go with a split coaching policy like they previously did for captaincy. They have recently appointed the New Zealand legend, Brendon McCullum as their red ball coach.

The 48-year-old Mott has previously represented Victoria and Queensland as a player before turning himself into a coach post-retirement. He played a vital role in shaping up the current Australian women’s side. He joined the ladies’ squad in 2015, and he, along with captain Meg Lanning, shaped up a pretty invincible side. He has also previously served as head coach of New South Wales and Glamorgan, and also had brief stays with the Australian Asides. Mott was also previously part of the Indian Premier League, as he was an assistant coach of the Kolkata Knight Riders back in 2009.

Delighted to accept the opportunity with England: Matthew Mott

“I am thrilled to be given the opportunity to play white ball for England.” While I am an Australian, I have strong ties to the UK, and some of my best mates live there, having spent time as a player and mentor in Scotland, Wales, and England.”Mott was quoted by an ECB release.

“When this position became available, I was drawn in by the opportunity to work with such a renowned and accomplished squad led by Eoin Morgan and now Rob Key, whom I have long regarded as an exceptional cricket brain,” he continued.

“The concept of divided jobs and the ability to work with Brendon McCullum in his red-ball position is one that I am extremely excited about, and it surely provides the proper balance for my family as we begin on this wonderful adventure.”

“It was always going to take something spectacular for me to quit the role I’d had with the Australian Women’s team for the last seven years.” However, I honestly think that the moment has come to contribute to the England Men’s ODI and T20 squad’s continued evolution as one of the top teams in the world.” he said further.

ECB MD Rob Key commented on Mott’s hiring: “It gives me great pleasure to introduce Mathew Mott as the Head Coach of our men’s white-ball squad.” He has had an unbelievable coaching path with a wide range of experiences that have led him to this point where he was exceptional in the interview session and the ideal fit for our white-ball teams.

“We are fortunate to have been able to recruit a Head Coach who has not only been involved in international cricket in recent years but who has also worked in franchise cricket throughout the world.” More significantly, what he has accomplished with the Australian Women’s team is what will be expected of him with our men’s white-ball teams.

“I’m convinced that we have a powerful pairing in Eoin Morgan and Matthew Mott that can strive for additional championships in the coming years, and that Matthew will be able to manage whatever change the squad will go through in the future.”

“Moreover, Matthew will assist us in investing in English coaches in order to provide them with as much expertise as possible over the next few years.”