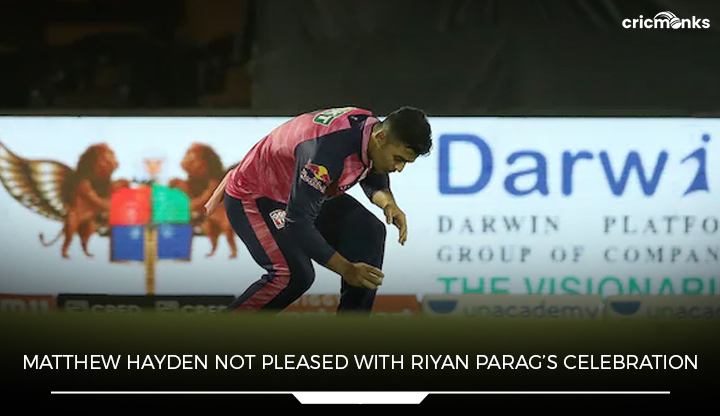 Former Australian opener Matthew Hayden is a part of the commentary panel of ongoing IPL 2022. Hayden is pretty straight when it comes to pointing out his opinion on certain things and he is one of the respectful figures when it comes to cricket analysis. During the match between Rajasthan Royals and Lucknow SuperGiants, the young Rajasthan batter did a cheeky celebration which caught the public eye and criticism.

Riyan Parag is one of the finest fielders in the whole tournament and has taken the most number of catches other than wicket keepers in the outfield. He makes catching look pretty easy as he is calm as ice whenever he is under a high ball. But, during this particular match against LSG he did a cheeky celebration after taking the catch of Marcus Stoinis.

It was the incidents that took place before the wicket that eventually led to the celebration from the side of the young player. Parag had made an attempt to catch earlier in the innings which was ruled not out by the third umpire. He had thought that he took a clean catch, but the third umpire decided against it and gave up claiming that the ball touched the surface of the ground upon contact with Parag’s hand.

The young filender gave his heart out for attempting to take that catch and was pretty disappointed with the result. This was the reason Parag took the next catch and mocked the umpire by taking the ball close to the ground without actually making contact and signaling out. Off Prasidh Krishna’s delivery, Parag grabbed a good catch in the deep mid-wicket zone to remove Marcus Stoinis.

However, it was Parag’s contentious celebrations that drew the most attention, not the catch. The commentary panel including Matthew Hayden was not at all pleased by the actions of the young Indian player.

Stoinis was looking in great shape and he was the main threat for RR which stood between them and winning the match. It was a crucial wicket at that point of time and Riyan Parag took the catch off Prasidh Krishna’s bowling. Upon taking Stoinis’ catch, Parag opted to return it to the officials, unhappy with the choice. Hayden, who was on-air at the moment, was irritated because he gave the youngster some advice.

“Got some advice for you young man, cricket is a very very long game, and we all have very long memories and you never ever tempt fate because it comes around quick enough,” stated the former opener.

However, Parag has been extremely outstanding in IPL 2022, with 17 grabs in the outfield. The young Assamese  has also produced some excellent strokes near the end, as RR is very certain to make the playoffs. The Men in Pink improved to second position in the team rankings with a convincing 24-run victory over LSG, bringing their total to 16 points.

Parag is a young talent that has been backed by the management for a long time. They are investing heavily and he is a sure starter for the side no matter how the teams perform. They believe in his hard hitting ability and excellence in the field. But, it is his celebrations that often turns to be the talking point after the match.

“We’ve been making solid decisions.” When everything doesn’t go your way, it’s difficult to maintain a relaxed mood. The boys deserve credit. You keep losing a bit here and there. We want to go out there and show our batting ability. “We have a strong bowling lineup to defend.” stated RR skipper Sanju Samson after the game.