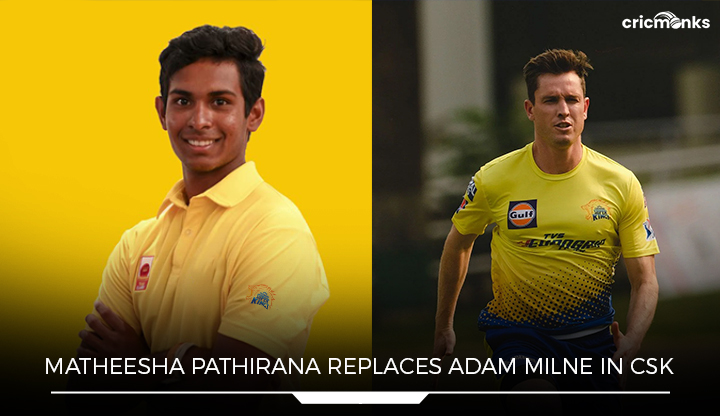 Chennai Super Kings has roped in the young bowling sensation Matheesha Pathirana as the replacement player for the injured Adam Milne. They made the official announcement on Thursday April 21 that Pathirana is going to be a part of the CSK set up. Adam Milne was a sure starter in the place of Josh Hazlewood who played a vital role in the CSK championship triumph. The Sri Lankan pacer was a part of the CSK group since IPL 2020 and has been a reserve player for two years. Now he has received an opportunity to showcase his talent on the greatest stage.

He was a part of the core Sri Lankan team that played the U19 World Cup and he caught the attention of cricket fans all over world with his unique action. He picked up  seven wickets from the four matches that he played for the U19 Sri Lankan side. He made his mark in the Caribbean land and provided entertainment with his slinky round arm action. He had an impressive economy of 6.16 in the U19 World Cup. He resembles so much of Lasit Malinga and fans across the globe had already named him Junior Malinga because of the similarity in the action. It is scintillating to know that Pathirana is also capable of producing toe cruising yorkers like Malinga as well.

Pathirana made headlines at the 2020 U19 Tournament after he hit India’s Yashsvi Jaiswal with a 175-kmph ball in their encounter in South Africa. He gained attention for the same reason, but it was eventually discovered that it was a system fault.

Pathirana was already a part of the CSK camp for two years now and the youngster is already experienced enough by bowling to some of the greats of the game in CSK nets. The franchise had a dreadful start to the season and they are now placed at the bottom side of the table. It is believed that Pathirana has made a great impression to the coaches in the practise session to finally being called to the main side. Pathirana had company of another spin wizard Maheesh Theekshana who is a part of the starting XI of CSK this year. The young superstar has only two T20 games to his name and also only two wickets from those matches as well.

Adam Milne, the New Zealand speedster suffered an injury in the initial game of this year’s IPL against Kolkata Knight Riders and he had to be ruled out of the entire season. Things got worse for CSK as they had already lost Deepak Chahar before the start of the season due to injury. Deepak was bagged in for a record price as CSK had the highest bid for the Indian international during the auction. Pathirana thus became the first ever replacement for CSK in IPL 2022. They have not replaced Deepak Chahar even though he is unavailable for the entire season.