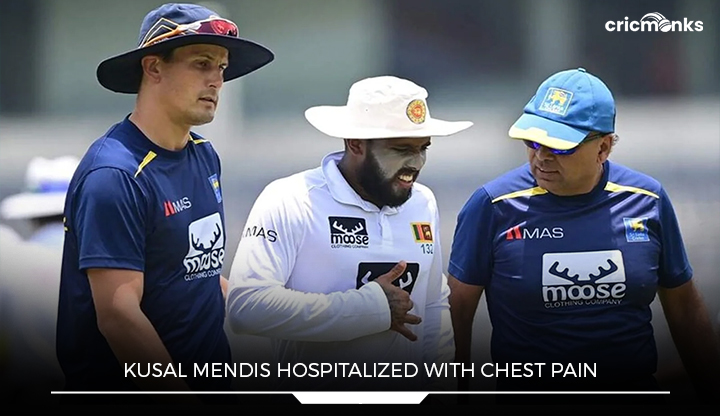 The Test series between Sri Lanka and Bangladesh was up and running and the first test match was eventually drawn at the end due to the fight shown by two quality international sides. They battled it rough to clinch a draw at the end. And now at the beginning of the second Test match, something dramatic happened on the field during the Bangladesh first innings.

Sri Lanka was dealt a big setback in the second Test with Bangladesh when their standout batsman, Kusal Mendis, was pulled off the game on the 23rd due to chest problems. Kusal Mendis was forced to leave the pitch during Sri Lanka’s second Test match against Bangladesh at the Shere Bangla National Stadium owing to severe chest discomfort. Mendis was spotted departing the ground gripping his chest and was subsequently admitted due to pain.

According to the most recent reports, the wicketkeeper-batter has been hospitalized in Dhaka. On Day 1 of the 2nd Test between Sri Lanka and Bangladesh, the right-handed hitter was spotted in apparent distress as he was taken from the field.

Mendis was fielding at second slip and then the Sri Lankan batter was seen holding his chest before the physio arrived to examine him. He couldn’t go on any longer and exited the field. Nevertheless, it was eventually discovered that it was a significant issue. Mendis was quickly brought to a local hospital and is presently being treated in Dhaka.

The Sri Lankan team will be hoping that their batsman is not gravely injured after he batted well in the first Test. The typically aggressive batter hit a half-century in the first innings and had a critical 98-run alliance with Angelo Mathews. Following two early wickets, the right-hander struck a counter-attacking 48 off 43 balls in the second innings. His aggressive performance set the standard for Sri Lanka’s performance, as they fought out a draw from an unlikely situation.

Bangladesh won the toss and opted to bat first, hoping to achieve a high total similar to the previous encounter. The match, however, could not have begun much nastier for the local team, as they sacrificed both openers in the first two overs. Tamim Iqbal and Mahmudul Hasan Roy were expelled without even establishing their accounts. Sri Lankan pacers Kasun Rajita and Asitha Fernando appeared to be on a tear as they restricted Bangladesh to 24/5. Rajita snagged a golden duck off Veteran Shakib Al Hasan. Bangladesh appeared to be in deep difficulty, as it appeared that they would not even reach the three-figure line in the innings. The seasoned partnership of Mushfiqur Rahim and Litton Das has stabilized the ship for the Bangladeshi squad, adding 86 runs and looking calmness personified at the crease. While Bangladesh attempts to attain a secure total, the host team will be trying to extend their presence at the field at least until the conclusion of the day’s action.

Doctor Manzur Hossain Chowdhury of the Bangladesh Cricket Board (BCB) stated Mendis needed to be brought to the facility for “appropriate treatment and effective medication.” According to Chowdhury, the Moratuwa-born cricketer was dehydrated before the game, which might explain his discomfort.

“Mendis had to be taken to the hospital for proper diagnosis and better management of his condition,” said Chowdhury

“He may suffer from dehydration, which could be a reason behind his discomfort. It might be gastritis as a possible reason for his discomfort. Once the diagnosis is completed, it will be possible to tell the thing exactly,” he added.

For now, it is unknown how prolonged Mendis would stay in the hospital or whether he will participate in the current Dhaka Test. The right-handed batsman had a respectable half-century in the first innings of the first Test, backed by a rapid 48 in the second innings, which helped Sri Lanka draw the match.