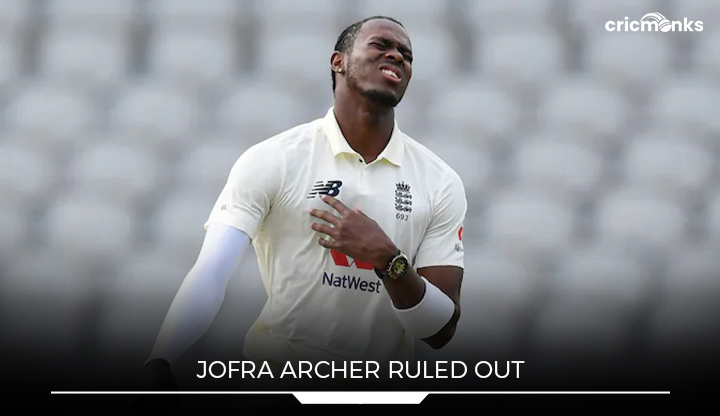 The England pacer Jofra Archer had been a sensation of the side in all three formats before a year or so until he was caught up with a major elbow injury. He was a part of the England limited overs side as well as the red ball side and played a crucial role in shaping up an invincible England cricket team.

The continuous suffering from the injuries also meant that Jofra would not be able to participate in the ongoing Indian Premier League as well. He was bagged by the Mumbai Indians franchise for 8 cr during the mega auction even though they knew that the pacer would not be able to make it back this season. The Mumbai side made this move keeping an eye on the future seasons. But now, things are going from bad to worse as the Englishmen is once again ruled out of the rest of the England schedule this year.

Injuries have afflicted England bowler Jofra Archer, who has been forced out for the remainder of the year owing to a stress fracture in his lower back. He has not played professional cricket since July 2021, where he represented Sussex in the T20 Blast. Archer, who had been out of cricket for more than 9 months, was set to return in the forthcoming T20 Blast series late next month. Unfortunately, his most recent injury has forced him to miss cricket yet again.

The England and Wales Cricket Board (ECB) announced the news in a press statement, although there is no deadline for the fast bowler’s return as of yet. In this scenario, the committee will also seek the advice of a professional.

“After being diagnosed with a stress fracture to the lower back, England and Sussex seamer Jofra Archer has been ruled out for the rest of the season. No timeframe has been set for his return. A management plan will be determined following further specialist opinion over the coming days,” ECB’s statement read.

Jofra Archer himself was highly confident of making the return and he was training hard also. He was looking forward to featuring in England’s upcoming schedules as well. Unfortunately, things went awry, and England will be hopeful that he can recover in time for the T20 World Cup later this year in Australia.

Mumbai Indians have one eye on Jofra Archer’s fitness

The five times IPL champions Mumbai Indians will also be mindful of the injury that has happened to the England superstar as well. The franchise had bought the speed gun to part Jasprit Bumrah in the upcoming seasons. Mumbai Indians went all out for Jofra despite the fact that he will not be able to participate in a single game in this year’s IPL tournament. They were thinking about the future and wanted to build a solid bowling combination including JOfra and Bumrah. But now, things are looking scary as Archer is set to miss another whole summer of cricket due to his continuous injuries.

Jofra Archer previously played for the Rajasthan Royals prior to the mega-auction. The series of injuries that was happening to the England pacer was a major concern for them also. That’s the primary reason why they never retained Jofra because they were not particular about what the future beholds for him. Turns out that the Rajasthan Management has made the wiser decision by not retaining him.