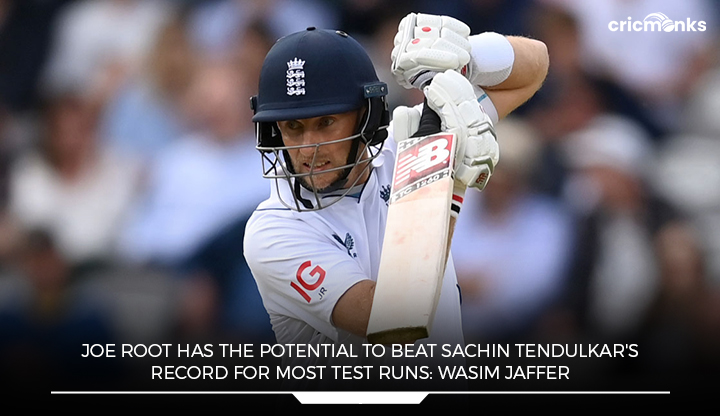 England ended India’s mission of claiming a Test series on English soil for the first time in over 15 years by defeating the tourists in the fifth Test at Edgbaston. It was never easy for the hosts as they were asked to chase a mammoth target of 378 runs in the final innings of the match. The record chasing feat was achieved with the twin centuries from Joe Root and Johnny Bairstow. While Bairstow has received praise for his recent turnaround in Tests, veteran Indian cricketer Wasim Jaffer believes Root may eclipse Sachin Tendulkar’s most runs in Test cricket.

The former England captain was the highest run-scorer in the five-match Test series with 737 runs to his name. He oversaw England’s record pursuit versus India as the home side pulled square in the series. Root has been in fantastic form in red-ball cricket over the previous couple of years, scoring a tremendous amount of runs. Former Indian opener Wasim Jaffer feels the Yorkshireman can shatter Sachin Tendulkar’s Test run record. Although English and Australian players conclude their careers very soon, Jaffer believes Root may accomplish the landmark if he continues to play at his present level for the next 5-6 years.

“He can do it if he plays that long. He is only 31 years old. We all know that the career of English and Australian players isn’t long. But, if he plays another 5-6 years, I feel that he is capable of breaking the record,” Jaffer stated.

The Englishman added another feather in his cap after the triumph in the Birmingham Test, as he drew level with Hashim Amla and Michael Clarke’s tally of 28 centuries in Tests. The no. 1 ranked Test batter in ICC rankings overtook contemporaries Virat Kohli and Steve Smith, who have both amassed 27 Test tons. Root currently has 10,458 runs in 121 Tests and faces the challenging task of overhauling Tendulkar’s monumental tally of 15,921 runs in the traditional format of the game.

He is batting on a different planet altogether in comparison with all others in his generation. Among the fabulous four, Joe Root was considered the weakest before a few years ago and now he has the most number of centuries among Virat Kohli, Steve Smith, and Kane Williamson. While Virat has scored only one century before his last one Joe Root had piled up 17 to his name to overtake both Virat and Steve in Test matches.