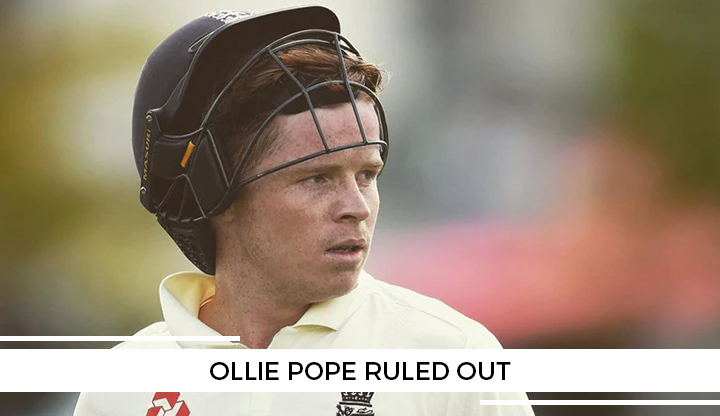 England’s middle-order batsman Ollie Pope has been ruled out of the opening of the five-match Test series against India due to a thigh injury. The first match is set to start on August 4, which does not speak well for the host team. Pope was supposed to bat at number six in the Trent Bridge Test, but he won’t be able to play anymore. After failing to pass the fitness test on Tuesday, Ollie Pope has been ruled out of the first Test against England.

Jonny Bairstow, an England wicketkeeper-batsman, will replace Pope in the XI and will most likely bat in the middle order. Bairstow hasn’t been in great form recently in the red-ball format, as he’s been struggling to put up decent numbers. With Ben Stokes and Jofra Archer already out, Pope’s injury comes at an unexpected time for the team.

Pope has been in excellent form for his side in the county circuit. The right-handed batsman is also a skilled spinner, which would have come in handy against Ravi Ashwin. According to The Telegraph, the batsman failed to show his fitness in the nets, prompting the ECB to call in Bairstow instead of Pope.

Bairstow also had his own problems in Test cricket, having recorded three ducks in four innings on his team’s recent Test visit to India. The Indian spinners consistently outplayed the right-hander and exposed his vulnerabilities.

Meanwhile, England Test captain Joe Root is confident in his team’s opportunity to dominate the series against India despite the absence of talismanic all-rounder Ben Stokes. Root believes it is an opportunity for other players to stand up and be counted now that the 30-year-old has declared he would not be playing the series due to mental health concerns.

“In my opinion, there is no one who compares to Ben Stokes in world cricket. For a long time, he has very much been the heartbeat of this team. But that does present opportunities for others to step up and put on a big performance. We have seen in the past the guys have been able to manage that. There have been times when we have been without Ben, and the likes of Sam Curran and Chris Woakes have come in.” Root said.

“Against India in the last series, Chris performed at Lord’s, and Sam throughout that whole series. More recently, at Old Trafford against Pakistan, the partnership between Jos Buttler and Woakes was match-defining. We have found ways to manage to win without Ben. And this is another opportunity for us to try and do that. Hopefully, we can start it this week at Trent Bridge and then take it forward.” he further added.