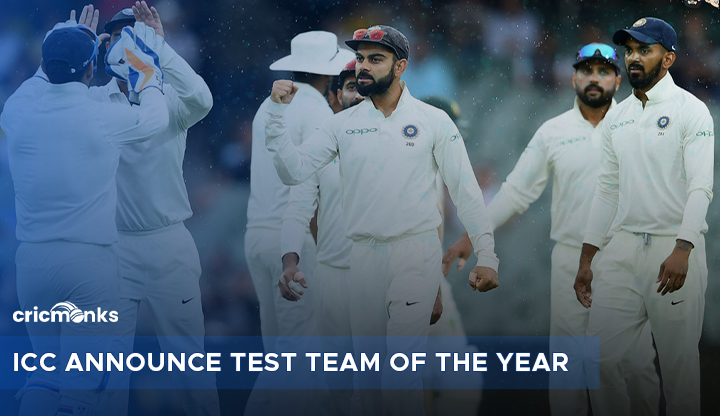 The International Cricket Council honors the best players in every format by announcing three different teams every year according to the performance of players all around the world. The  ICC Men’s Test Team of the Year honors the best cricket players in the world in the Test version of the game. The squad does not play and it exists simply as an honorary unit. The Test team of the year will include 11 players from different nations which showcased some extraordinary performances throughout the year. It is completely down to the International Cricket Council (ICC) to pick the best players according to their recent performances.

India, despite being unable to reclaim their throne in the longest format of the game, is stacked with talents that can make it to any side in the world. The inclusion of three Indians in the Test Team of the year is a perfect example of it. Interestingly, this is the first time a squad without Virat Kohli is announced in any of the formats. The squad also features three Pakistani players who happen to be two pacers and one batter. The best Test Team in the world, New Zealand is represented by two players and a player each from Sri Lanka, Australia and England makes up the rest of the squad.

Kane Williamson of New Zealand has been named captain of the ICC’s Men’s Test Team of the Year, which was announced yesterday. Williamson had a remarkable year in 2021, starring with his captaincy skills along with his batting. The Tauranga cricketer guided New Zealand to a World Test Championship victory against India in June of last year. He has shown his class throughout the year with his classy batting and the win against the strongest opponent India in the final of the Test Championship at Lords made him the best pick out of all the captains in the longest format of the game.

Another predictable inclusion is the Indian opener Rohit Sharma who renounced himself in the toughest format with a century away from home. Team India’s white-ball captain, made 906 runs in the previous calendar year, including a handful of hundreds. While the first was geared at a rank-turner in Chennai, the second was designed for the cloudy circumstances at London’s Oval. Rohit’s Test average in the previous year was 47.68.  There is no better opener in the Test format other than Rohit at this moment. He was heavily criticized for his spot in the playing XI in the Test format, especially away from home. The England series was the perfect stage for Hitman to announce himself to the world that he is a worthy opener in the longest format also.

Rishabh Pant who has been the X factor player for India in all formats is the second Indian to be included in the XI. India’s youthful wicket keeping batter may have only scored a century in the home series against England, but he produced match-winning runs of 97 and an unbeaten 89 at the SCG and Gabba as Team India won its second consecutive series in Australia. He was pivotal in  both the away victories and he was the main man when the young Indian squad breached the Gabba to register a second consecutive series victory in Australia. Pant, in addition to hitting 748 runs in 12 matches, was excellent behind the wickets as well. He is a much more improved wicket keeper now and has a record of 39 dismissals in 23 innings.

Ravichandran Ashwin is the third Indian to feature on the list. There is no debate on who is the world’s best spinner at present. Even though Nathan Lyon is a tough competitor for Ashwin in the longest format, his comeback into the limited overs and the domination he has shown against world class batters in all the formats makes him above par in comparison to other bowlers in the world. The Tamil Nadu cricketer took 54 wickets in nine games, averaging 16.64. Ashwin has also managed to contribute to his side with the bat when it mattered the most. He has also scored a handful of 355 runs at a 25.35 average, including a match-winning century against England at Chepauk.