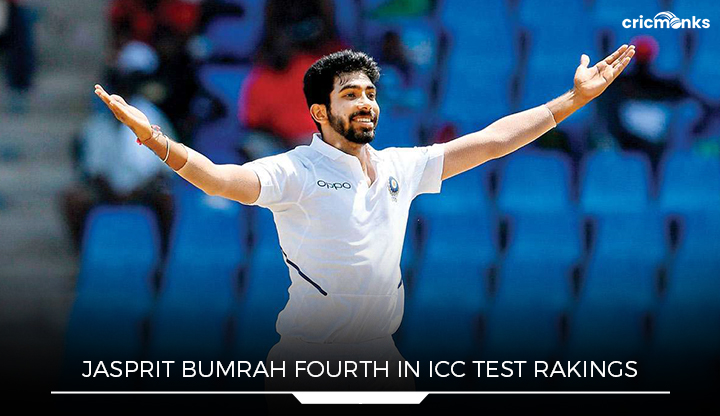 The MRF Tyres ICC Test Rankings have been updated after the conclusion of the India Sri Lanka Test Series which was whitewashed by the hosts. Two key players from each of the side have shown tremendous improvements in their career rankings and they have been well rewarded for the kind of performance they have shown in the series. Jasprit Bumrah apart from being the vice captain of the side, has been the spearhead of the whole bowling attack. He bagged a five for in a rank turner at the Chinnaswamy Stadium in Bengaluru and it was some one of a kind performances from the Indian pacer which can be possible only for someone special. He has shown great character in all the series he was a part of ever since he made his debut in the longest format. Bumrah was considered only for away Tests because of the large pool of talent that the Indian team had over the years. But, after being given the permanent spot in the Test team for both home and away matches, he has been pivotal and now he has come a long way to become the vice captain of the side. He has jumped several spots to become fourth in the latest rankings for bowlers in the Test format. The Indian speedster leapfrogged Shaheen Afridi, Kyle Jamieson, Tim Southee, James Anderson, Neil Wagner and Josh Hazlewood in the table.

Some of the other major improvements include the Indian Pacer Mohammed Shami who surpassed his fellow teammate Ravindra Jadeja. Shami has been a regular face especially in the longest format and is now in the 17th spot in overall rankings for pacers. Ravindra Jadeja on the other hand has slipped down to 18th on the list to become one of the leading bowlers in world cricket right now. He is an impact player and he could change the course of any match with either bat or bowl and even through his fielding. His bullet arm throws and direct hits along with his acrobatic saves are nightmares for every batsmen.

Lasith Embuldeniya and Praveen Jayawickrama who are the spin twins of the Sri Lankan test team have jumped up five positions each to 32nd and 45th slot respectively. They have been really successful in both home and away tours for their side. Embuldeniya, especially, has been unplayable at home and has got the better of many foriegn batters who came to tour Sri Lanka in recent years. They both have shown great character and gave decent performances in the recently concluded test series against India as well.

Pat Cummins, Ravichandran Ashwin and Kagiso Rabada have retained the top three spots for the bowlers. Pat Cummins even after becoming the captain of the mighty Aussies side, has shown no change in the kind of performances he used to give for his side. He has been highly consistent to retain his spot right at the top. He was excellent during the Ashes series and he is one of the all format bowlers who could deliver at any point of time in any conditions. He has taken the baggy green with pride and won the Ashes against England as well.

Ravichandran Ashwin has been a legend in the red ball format and he has recently surpassed Kapil Dev to become the second highest wicket taker for India after Anil Kumble. He has been a great ambassador for the game and has been consistent in both home and away series. He has got the better of the Aussie legend Steve Smith twice in Australian conditions which marks a difference between him and all the others. He has been innovative with his variations and Ashwin in Indian conditions is simply unplayable. He gets the better of all batters in subcontinent conditions, especially Left Handers.

The Sri Lankan captain Dimuth Karunaratne jumped up to career-best number three position in the ICC Test batting charts. He has been a consistent performer for the Lankan side ever since he has been named as the captain. He has steadied the ship and saved the team from collapse on many occasions. The recent knock that he played against India on the rank turner pitch of Chinnaswamy is a perfect example of his calm and composed nature under difficult scenarios. He scored a scintillating century under the lights and helped Sri Lanka narrow down the magnitude of the loss.

Nkrumah Bonner of West Indies and Shreyas Iyer of India are two significant leaps jumping a staggering 22 and 40 spots respectively to 22nd and 37th position. Bonner has grown himself to become one of the prominent faces in the West Indies Test squad and has recently scored an astonishing 123 in the first TEast against England. Iyer had a mesmerizing Test match against Sri Lanka scoring 92 and 67 on a rank turner. Pakistan skipper Babar Azam advanced to No.8 in the batters table. He has been highly consistent for his team especially in the longest format. The batting table is led by Australian sensation Marnus Labuschagne, followed by Joe Root, Steve Smith and Kane Williamson respectively.

Virat Kohli has slipped four places and is now ninth among batters. He was someone who ruled the rankings in all formats and right now he is going through one of the worst phases of his career with no real consistency. The level of consistent performances that he gave for team India was unreal that the kind of knocks that he gives now is equal to the top level performances of other batters. Such is the standard he used to set for himself. He has been a regular at the top three spots across formats for a very long period of time. Right now he has shown a dip in his form and he is working really hard to regain the standard he has set for himself over the years.