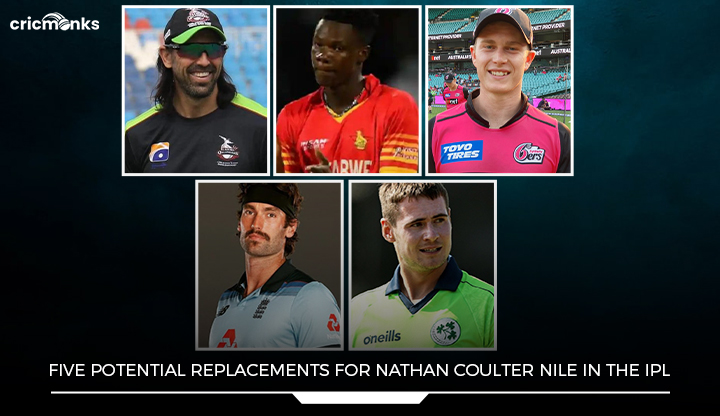 Nathan Coulter Nile started as one of the overseas options for Rajasthan Royals in their opening match against the Sunrisers Hyderabad. He was taken to the cleanest and during the start of the final over of the bowling innings, the Australian pacer faced a side strain and had to pull out of the match before completing his full quota of four overs. The last over was finished by Riyan Parag and no one expected that the injury he suffered during the initial match would turn out to be curtains for his entire IPL season. He has been ruled out of the entire season owing to the injury and they could well be looking for a bowler who could bowl his full quota of overs and also strike a few blows at the end.

Rajasthan Royals went into the auction with a set of plans and they have Obed McCoy on the side who could be a worthy replacement. He had a brilliant home season against South Africa where he took 9 wickets followed by 5 wickets against the mighty Aussies. The brilliant bowling performance by McCoy includes two four-wicket hauls and one three for. They also have some quality Indian backups in Kuldip Sen, Anunay Singh, and Kuldip Yadav.

Here is a list of possible replacements for Nathan Coulter Nile:

David Weise is a traveler who plays cricket on the way. He has featured in numerous T20 leagues all around the globe and has recently starred in CPL and PSL along with his performances for Namibia in the WC as well. Wiese even though had represented South Africa in the past, has changed his nationality to Namibia and debuted in the World Cup Qualifiers. He showcased two back-to-back Man of the Match performances in their first three matches which eventually helped them go beyond the qualifiers and advance to the Super 12 round for the World Cup.

Wiese holds an impressive record in the CPL with 11 wickets from 5 games along with 91 runs to his name. Wiese represented the Lahore Qalandars in last year’s PSL and took 9 wickets for them. He was awarded the player of the match award in the eliminator for scoring 28 from 8 balls. He backed it up with again scoring the same amount of runs in the final as well. On the whole, he scored 168 runs at a strike rate of 184. Wiese had already replaced RCB back in 2015 when he took 16 wickets along with 122 runs to his name.

Muzarabani is a superstar in the making who has already made his presence felt in the Pakistan Super League. He played for the Multan Sultans last year he had a collection of 10 wickets to his name at an economy rate of 7.71 for his side. He also had excellent figures to his name in the final of the tournament where he ended up with figures of 2/26 from 4 overs that included prized wickets of Zazai and Powell who are match-winners on their day. The young bowling sensation from Harare has got a record of 44 wickets to his name in the T20 format with an economy of 7.81.

Even though he is a star performer, his availability in the IPL is a major concern for every franchise as Zimbabwe is scheduled to play Ireland during the IPL cycle which includes 5 ODIs and 3 T20is along with a one-off Test match. He is already a part of the IPL this year as he was assigned by the Lucknow franchise as a net bowler. It was reported that he could well become the replacement for Mark Wood in the Lucknow side which eventually ended up in Andrew Tye.

Hayden Kerr is one of the future stars for Australia as he is in the domestic setup and BBL for a long period of time now. He is now known for his jawbreaking innings for Sydney Sixers that took them to the final of BBL 11. He scored a tremendous 98* off 58 balls. He was also the second-highest among wicket-takers in the Big Bash League 11.

He plucked 25 wickets from 17 innings at an economy of 7.5. He is a left-arm medium pacer and could well be the kind of replacement that the Rajasthan Franchise is looking for. He had previously expressed his wish to become a part of the cash-rich league.

Reece Topley is one of the most promising pacers from England who has tons of experience in the shortest format, playing a lot of domestic competitions. The tall English pacer has an experience of 104 matches to his name in which he has managed to take 131 wickets at an economy rate of 8.21. He was signed by the Melbourne Renegades in the BBL last year and he has delivered fot them with 9 wickets in 8 matches. In his recent series against the West Indies he had a pretty decent performance with the ball. He is someone whom every franchise could bank on for his full quota of four overs.

Joshua Little had impressed one and all with his brilliant performance in the recently concluded World Cup. He was picked by the defending champions Chennai Super Kings and a net bowler before the start of the season. He has a quite impressive record in the T20 format where he has taken 54 wickets from 54 games including a career-best figure of 4/23. He has been the star performer for the Ireland side where he has picked 31 wickets at an economy of 7.4. He is a bankable death bowler and also has the ability to swing it both ways at a reasonable pace as well.

Obed McCoy is already in the RR squad as a  left-handed bowler. Other left-handers to consider are George Garton, Sheldon Cottrell, Reece Topley, Joshua Little, Ruben Trumpelmann, Shoriful Islam, and Ben Dwarshuis. Among these, Joshua Little, Topley, and Cottrell are greater prospects.