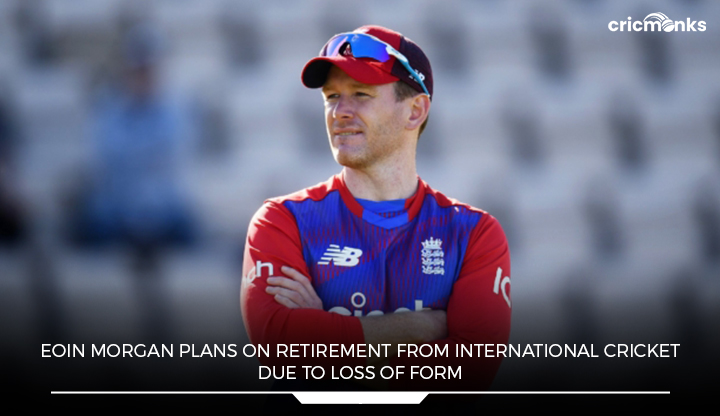 Eoin Morgan, the England captain who led his team to victory in the World Cup, is allegedly contemplating his destiny and may announce his retirement from international cricket this week. The long drought of the form regarding the England captain was a huge concern for the team for a long period of time. The 35-year-old experienced form and fitness concerns during the recently finished ODI series against the Netherlands in Amstelveen before retiring from the third match due to groin discomfort.

Morgan was removed for a golden duck in the first ODI of the three-match series, he was seen returning to the dugout for a seven-ball duck in the second game. The loss of form concerning the England captain was persistent for a long period of time. The productivity graph has reached a dreadful bottom, and his ability has been declining lately. That could have also been a factor in why no franchise selected him in the IPL 2022 mega auction.

The immense talent among the pool of England cricketers is one of the reasons why the position of Eoin Morgan in the limited-overs side is challenged.  The English white-ball game has undergone significant change over the past seven years, and Morgan may have been prepared to end things. The lefty shocked others by taking part in a corporate match at the stadium on Saturday, but he has now postponed a visit to the Hackney school for the cricket charity “Chance to Shine.”

If Morgan wants to stand down as captain, Jos Buttler, who has been the team’s vice-captain since 2015 and has led them on 13 occasions, is anticipated to replace him. Moeen Ali, another recent replacement, may also be a candidate. Knowing that the English team is one of the best right now and that they are preparing for both the T20 World Cup this year and the ODI World Cup that will be contested the following year, it seems sensible that Morgan is thinking about his time in the white-ball format.

Rob Key and white-ball coach Matthew Mott have shown Morgan a lot of encouragement. Only two half-centuries in his previous 28 international innings in the two white-ball formats. One of the most dangerous white-ball batting sides in cricket history has undoubtedly been constructed by Morgan, and his replacement would undoubtedly want to continue in the same vein.

The England side is in a phase of transition in both the long and short formats of cricket. They have appointed Ben Stokes as their Test captain to replace Joe Root and, similarly, would like to reshape their limited-overs side by choosing Jos Butler or Moeen Ali over Eoin Morgan as their new captain.