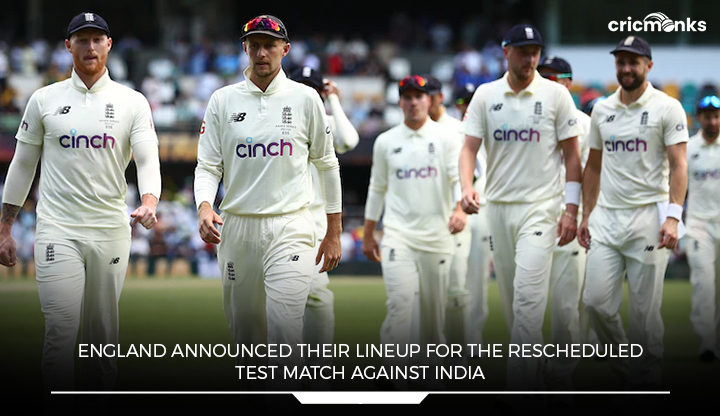 The team for England’s fifth Test match against India has been revealed with the match set to begin on July 1 in Birmingham. The selection committee has chosen to stick with the team that thrashed New Zealand in the three-match Test series. Thanks to half-centuries from Joe Root, Ollie Pope, and Jonny Bairstow, who slammed 71* off only 44 deliveries, the home team easily chased down 296 runs on the final day to seal the Test series 3-0 against the current world test champions.

Sam Billings, who came into the side as a replacement for the Covid-struck wicket-keeper batter Ben Foakes, has managed to keep his position in the side. He was added to the side just before the start of the third test for Ben Foakes, who was hit by COVID. Billings only had to bat once as the English side produced one of the greatest chances to win the match comfortably yet again. The Overton brothers also kept their place in the side following their impressive performance against New Zealand.

Foakes who is the first choice wicket-keeper of the England side has his participation in the Test against India is still in doubt. Only one day before the start of the game will his five-day confinement be over. The decision to risk putting him in the starting XI by the host team is still up in the air. Additionally, England could favor Billings, who has played in just two Tests, despite his youth.

Although England won the series in brilliant fashion, the administration was concerned by Zak Crawley’s performance. In the series, he was only able to produce 87 runs at an average of 14.50. They expect much better from the English opener and will stand up tall against tough opposition like India. Even though the selectors have chosen to continue with him in the squad, Crawley might not have the chance to remain in the starting lineup. England has chopped and changed their opening combination far too many times after the retirement of Alistar Cook and is yet to find a formidable pair up the top.

England are expected to remain unchanged from the last match except for the return of the legendary pacer James Anderson. He was not a part of the last Test match due to niggle, and it is certain that the England side would need his services and capabilities against a strong Indian side. It would be fascinating to see who they would replace Anderson with on the side. Stuart Broad, Matthew Potts, and Jamie Overton each had a respectable Test match and series against New Zealand. Overton, who took Anderson’s position, took two wickets in the game, he also made a significant 97 runs in the first innings after entering the batting order at 55/6.