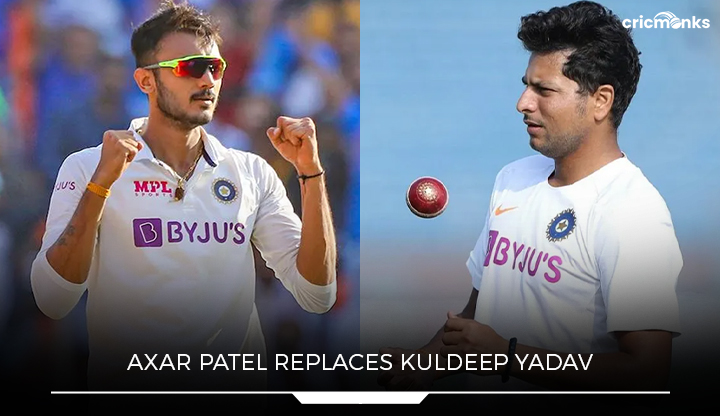 The Indian team has dominated the first Test match against Sri Lanka in all aspects. The all-around performance of R Jadeja along with the spin wizard R Ashwin made sure that the match will be finished within three days itself. The Indian team has now made a crucial change to their squad ahead of the second Test match. Growing from strengths to strength, the Management has released Kuldeep Yadav from the squad and replaced him with Axar Patel. India went into the match with only two pacers and three specialist spinners. Jayant Yadav who featured in the first Test match in the role of the third spinner is likely to be replaced by Axar Patel. The inclusion of Axar would only make the Indian team more tougher beat.

Axar was covid positive and was sent to the NCA for proving fit. Now he has fully recovered and is a part of the team bubble in Mohali. The team management feels that there is no need for three left arms on the side. India announced their lineup for the two Tests, which includes slow-ball bowlers R Ashwin and Jayant Yadav in addition to Patel and Jadeja. It was stated at the time of the squad announcement that Axar Patel is on rehab and will not be available for selection before the 1st Test match. On February 22, the BCCI had ascertained that “Axar Patel is currently undergoing his rehab and is not available for selection for the first Test. He will be assessed later to ascertain his selection for the second Test.”

Axar Patel has returned to the team after a three-month break. He played his last match for India in the December Test against New Zealand in Mumbai. He has progressed himself to a higher level of performance after earning the white jersey. He has has 36 Test wickets, including five 5-wicket hauls in five matches. He strikers every 34th ball with an average well below 12.

Kuldeep Yadav last played for India in February 2021. After that, he was in and out of the side but was not able to feature in any test matches after that. He has played a total of 7 games for India and taken 26 wickets at an average of 23.85. He also has two five-wicket hauls for India in the toughest format of cricket. Kuldeep used to be a regular feature of the Indian side in the limited-overs side along with Yuzvendra Chahal. Due to poor performances, he started becoming sidelined and slowly became a reserve player in both formats of the game.

The Indian team dominated in the first Test against Sri Lanka. T the Rohit Sharma-led team thrashed their opponents by an innings and 222 runs. Ravindra Jadeja was named Player of the Match after hitting 175 runs and taking 9 wickets in the match. Sri Lanka must win the second Test in order to tie the two-match series. The second Test match between India and Sri Lanka is scheduled to be a day and night test and it will take place in Bangalore on March 12, 2022.