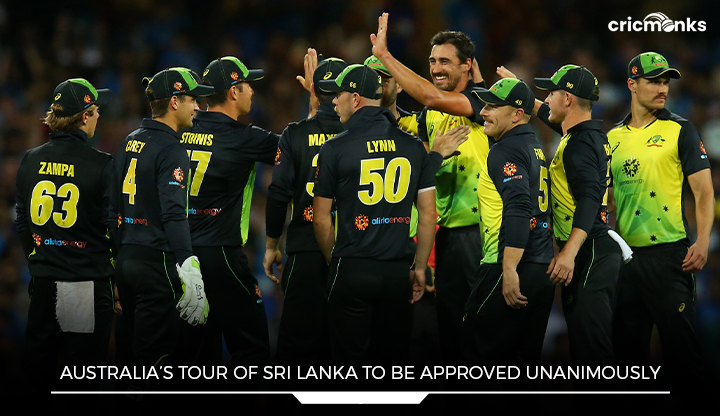 The much anticipated Australian tour of Sri Lanka was in a spot of bother as it was unclear whether the tour would happen as per schedule. The primary reason was the disinterest shown by the Australian players in traveling to Sri Lanka considering the civil unrest in the country. But, as per the latest reports, Australia’s tour of Sri Lanka is going to happen as per schedule as both the cricketing boards have unanimously agreed to proceed with the tour. The tour consists of three T20Is along with five ODIs, and two Tests in the island country.

There had been concern that the series may be canceled or rescheduled owing to the continuing civil disturbance in Sri Lanka, but both nations’ boards have reaffirmed that the series will continue exactly according to plan. The Australian players were not sure whether they should carry on with the tour or not. They have finally agreed to tour Sri Lanka in these tough conditions to bring peace and happiness to cricket fans all across the globe.

Australia will begin the series with a T20I series, the first of which will be contested on June 7th at the R. Premadasa International Cricket Stadium in Colombo. The three T20Is and five ODIs were rescheduled because of the continued upheaval in Sri Lanka, which is running low on gasoline and medications and experiencing continuous power outages. The Sri Lanka Board of Control, however, has already guaranteed that the games would be contested with lights.

“There is no disruption in the schedule and the white ball games will be night or day-night affairs,” SLC secretary Mohan de Silva said on Tuesday.

Australian players are hoping for a hard-fought series

Australian skipper Aaron Finch will try to end his poor streak. Australia, which will host the T20 World Cup ahead this year, is hopeful that cricket may bring joy to the hearts of Sri Lankans during these difficult times.

“We are always well looked after by CA, security, and the information we are given, so it’s exciting to hopefully put a bit of a smile on the Sri Lankan faces,” Alex Carey said to Fox Cricket.

The Australian board also mentioned that their team are expecting a tough game on Sri Lankan soil as they prepare for the T20 World Cup.

“We’ve been keeping in regular contact with the governments of both countries and SLC and all is good and there are no changes to the plans.” The T20 squad is leaving Australia tomorrow afternoon. They’re looking forward to the tour, with the three T20 games being an important part of the build-up to the ICC World Cup in Australia in October-November. The squad has great respect for the Sri Lanka team and is anticipating a hard-fought and exciting series, “a CA spokesman said.

Both teams are looking in great touch after the conclusion of the Indian Premier League, where plenty of superstars from both nations were able to make a mark for themselves on the biggest stage. Even though there were few opportunities for Sri Lankan players to make an impact on the toughest league, there was a considerable amount of improvement both in games and by names who represented several franchises in the tournament.